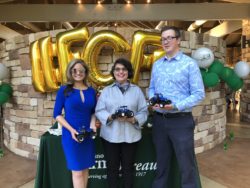 9
SHARES
ShareTweetSend to a friend

According to the FCFB, "The annual awards recognize excellence in reporting on agricultural issues from journalists throughout the region. The criteria for the awards were: awareness of agriculture’s importance in the Valley; use of visuals to tell the story, where applicable; thorough and objective coverage of the issues, given time and space limitations; and portraying the ‘human side’ of the industry, making the issues relevant to consumers and/or producers."

Laurie's careful coverage of a complicated story was unrelenting in its meticulous research and thorough in cultivating numerous sources to tell the complete legal story of Gerawan's farm employees. Laurie has been cited as a journalist with a sharp legal mind and is a strong asset to the company.

“When I moved to the Central Valley,” Greene said, “I was shocked to discover that Cesar Chavez’s legacy was tarnished. His UFW had evolved to mandate that farm employees submit to mediated union representation and payment of dues—all this by a union elected a quarter century earlier that subsequently abandoned the workers for two decades.”

Greene explained, "Current farm employees have had to fight to have their voices heard, to gain access to pertinent court hearings, to work unimpeded for the employer of their choosing, to face employment termination if they refuse to pay union dues, to exercise their right to vote to decertify the union in a sanctioned election and to have their votes publicly counted. I felt compelled to relay the facts in this important story."

Other award winners were:

Greene focused on the ongoing pressure the United Farm Workers (UFW) and the California Agriculture Labor Relations Board (ALRB) has placed on Gerawan farm workers in an attempt to force them to accept mandatory fee-based union representation by the UFW. Gerawan employees voted in favor of UFW representation in 1990, an election the ALRB certified in 1992. UFW never reached a contract to represent Gerawan employees in wage negotiations with their employer and never collected union dues. The UFW effectively abandoned the farm workers for 20 years.

The California Legislature amended the Agricultural Labor Relations Act in 2012 to impose a mandatory mediation and conciliation process for union contracts. The UFW offered Gerawan employees a new contract proposal via this forced legal process.

On Oct. 25, 2013, Gerawan employee Silvia Lopez filed a petition to decertify the UFW as the bargaining representative for the company's workers. Gerawan voted in an historic, ALRB-sanctioned election on November 4 or 5, 2013; however, the ALRB impounded the ballots, reportedly without having counted them.

The twists and turns of who actually safeguards California farm employees’ rights have been strikingly dramatic, undemocratic, political, and arguably unconstitutional. And yet, the conflict remains legally unresolved.