Labor Unions Could Be Cause of Farm Closings 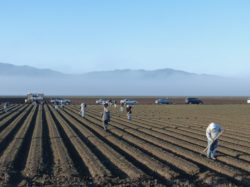 Labor Unions Could Be Cause of Farm Closings

117
SHARES
ShareTweetSend to a friend

Major Farm Operations With UFW Contracts Have Shut Down

Farms operations shutting down due to labor unions and UFW contracts is something that is suspected, but businesses do not outright admit it, said Robert Roy, President/General Counsel at the Ventura County Agricultural Association based out of Camarillo.

Roy explained that workers see no reason to pay three percent of their wages for many of the things that farmers are now providing that maybe they didn't previously when UFW was around.

“Farmers have basically caught up with many of these UFW contracts, and selling the union to the workers is a much more difficult proposition, especially when they have to pay three percent of their wages,” he said.

Roy says that most Supreme Court decisions have been pro-worker as of recently, including a recent case involving a Starbucks employee.

“We have been watching some of their decisions over the last 12 months, and they're very nuanced decisions dealing with wage and hour issues and rounding practices,” Roy said. “They recently issued a decision on a class action case where a Starbucks employee was owed $112 because after he clocked out, he would lock the door, and do other tasks. The California Supreme Court came back and said, 'well, you know, $112 to some people is a week of groceries. He's owed it.' So the California Supreme Court is very pro-worker.”