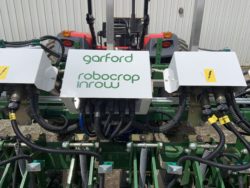 By Tim Hammerich, with the AgInfo Network

What will it take to solve agriculture’s labor shortage? Many say technology and automation are the future, but often these technologies are expensive and the payback periods can be too long.

Parker Jones saw this as an opportunity and in 2019 he launched Hermanos Automated Service. The company purchases expensive labor-saving equipment and offers it as a service to Salinas Valley vegetable growers. Jones says it all started with an automated weeder.

“Our weeder is called a Garford InRow Weeder. It uses vision sensors to detect the planting pattern and just kind of goes in between and outside of the plants with a little half-moon disc,” said Jones.

“And the way it takes the weeds out in between the plants is the most natural, almost identical to how a human uses a hoe. In the motion where yes, it does go around the plant, but the way when it cuts into the ground, it's almost dang-near identical to a hoe,” he said.

The service has caught on. Jones has added machines and is trying out new equipment to expand his offerings.

“We started out with, with one machine, and now we're up to three machines that would be working every day if it would stop raining,” he explained.