In an exclusive interview with Joe L. Del Bosque, Jr. after he and his wife, Maria Gloria Del Bosque, hosted President Obama on his farm in Merced County, Empresas Del Bosque, Inc., Del Bosque reflected on the eventful day.

A grower of almonds, cherries, cantaloupes, honeydew melons, asparagus, and mini watermelons, Del Bosque commented, “It was such an honor to have him there, for him to fly all the way out from Washington, and drop in on our farm. We were speechless.”

“My wife was so excited and so nervous about President Obama’s visit, but I told her, “Don’t get nervous. He is coming to our place; this field is our home. We’re inviting him here, it’s a great honor, but we have an important message to tell him.”

“The privilege that we got to be the ones to tell him our story, to represent the Valley—it was just awesome,” said the down-to-earth melon farmer. “It was just awesome; I can’t describe it any other way.”

Michael Connor, Commissioner of the U.S. Bureau of Reclamation

"And the audience was just my six daughters and their husbands."

“I think they got a crash course in California water and Ag,” reflected Del Bosque. “One important thing I came away with is the President said that California is very important to the nation, Ag in particular. I think he has a great awareness and respect for what we do for the country in agriculture here.”

“He certainly mentioned that he and his wife, Michelle, are into eating healthy food,” Del Bosque commented, “and I told him that we don’t just grow food in California; we grow healthy food. And I think he took that with him.” 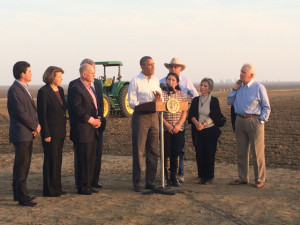 The President’s trip was brief and very structured, but at one point, Del Bosque and Maria Gloria were invited to join the President and the Governor in the presidential Suburban. “It was a short ride, probably less than 10 minutes. But we got to chat there. It was great: that one-on-one conversation, sitting face-to-face, and the governor there, listening. The President asked me about my life, so I told him a little bit about it. And he mentioned that during the press conference in the field.”

In his speech, President Obama remarked that Joe told him there are three things that make farming work California: soil, water, and people.

“I think the President understands," continued Del Bosque. “He heard the message of what the potential losses are from some of our agricultural leaders. And I even mentioned that there are far-reaching losses—not just the loss of the communities, the jobs—but loss of food too.”

“The President heard a lot of things; whether they all registered and how well he understood it is hard to say,” Del Bosque remarked. “Because a lot of times, when people come from the city to the country, they don’t know what they are seeing, and sometimes they don’t know the language that we tell them. For instance, President Obama made a mistake in his speech: instead of saying “aqueduct”, he said “aquifer”.

“So, when people come from the city like that, you don’t know whether they are really understanding it. I’m hoping he did, but certainly we are going to keep after this, pursue this, to make sure that he understood.”

Del Bosque also thinks this event puts a great deal of pressure on the Governor to do something.

Del Bosque gave careful thought to his own role, “I always try to bring up the impact on farmers and farmworkers because I feel that I don’t just represent farmers; I represent farmworkers and the communities, so that’s what I bring to the table.

“I don’t try to propose solutions. That is for the water guys; they know those things. My job is to say, ‘What is the effect on the Valley and communities?’ So, I always try to bring that approach.”

Del Bosque summed it up, “It was such a great experience today and for the whole week because I was involved in the preparations since last Saturday.”

So, quite an experience!”