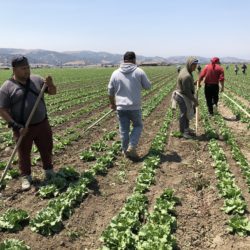 By Tim Hammerich with the AgInformation Network

Calling for “strong leadership and bipartisanship” from Congress and the incoming Biden administration, more than 180 groups, companies and individuals urge quick action on immigration reform. The coalition, which includes the California Farm Bureau and other agricultural groups, issued a joint statement Tuesday. It described immigration laws as “decades overdue for an overhaul” to create a “modern, humane and effective immigration system.”

A measure passed by California voters last fall could complicate the transfer of family farms from one generation to the next. Proposition 19 affects taxes on homes and inherited property. A California Farm Bureau specialist says the measure could trigger a partial property tax reassessment of an inherited farm or ranch—depending on property value and other factors. Farm Bureau is seeking clarification on the measure’s impact.

During the next few weeks, beekeepers will finish moving some 2.5 million honeybee colonies into California orchards to pollinate almond trees. But beekeepers who lost hives to wildfires last summer say it may take them more than a year to rebuild. A Solano County beekeeper who lost most of her bees, buildings and equipment to wildfire says she will spend this spring making more hives, to be ready for the 2022 pollination season.