Hybrid Peppers on the Rise 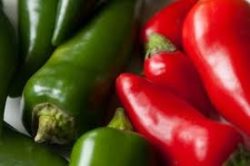 Hybrid Peppers on the Rise

Before 2001, there were no hybrid Habanero Peppers. Terry Burke, hot pepper breeder for Seminis Vegetable Seeds—composed of several of the most well-known and trusted local and regional seed brands, some dating back to the mid-1800s—spoke to California Ag Today recently about hybrid peppers.

Seminis has a proud heritage and a long history of excellence. This extensive experience in the global market coupled with the rapid advancement of technical capabilities enables them to continually add to their vast and diverse collection of germ plasm. Burke explained how previously, growers weren't interested in hybrids.

At the time, there were no hybrid habaneros; they were all just local open pollinated varieties. Ranchers wanted nothing to do with hybrids as the seeds would be too expensive.

“I made some crosses and developed a couple of good hybrids, including Chichen Itza in 2002,” Burke said.

A grower in Mexico allowed Burke to experiment with one row on his ranch. That year, there was a lot of virus pressure in Mexico. At the end of the trials, the only plants bearing acceptable fruit were the hybrid peppers known as the Chichen Itza.

“It turned out that they had very good virus tolerance, and when we saw the grower, he didn't even ask what the price of the seed was. He just wanted to know when he could get seed,” Burke said.

“I enjoy solving problems for farmers, helping them make a good crop and a good living.”

There is a focus on disease resistance and two new hybrids debuting this year.

“We are launching two new hybrids this year in Anaheim called Spitfire and a new Santa Fe Grande,” Burke said.

Both have Phytophthora resistance. Burke and his fellow breeders have been working on this resistance since 2007.

“We developed a molecular marker linked to the resistance, and now we can use that marker to transfer the resistance into all these different cultivated varieties,” he said.

There are four main diseases that attack peppers in Mexico and the U.S.

“Phytophthora is one, Spotted Wilt Virus is another, Powdery Mildew is a fungal disease, and the Bacterial Spot—all of which we have resistance for,” Burke said.

They have molecular markers they are able to use to create a quad stack hybrid pepper.

“You should be able to grow any of these peppers anywhere in the U.S. or Mexico. That's our goal,” he said