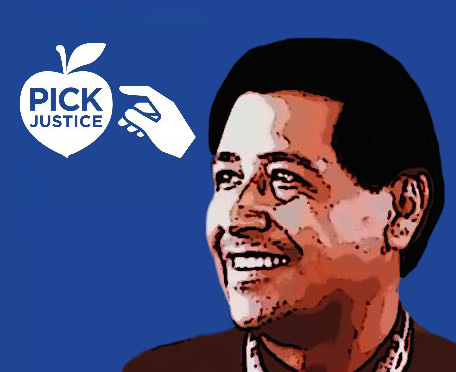 Chavez Spent His life Trying to Improve Farm Worker’s Lives, Instead of Threatening Their Lives

Cesar Chavez spent his life trying to improve life for farmworkers, fighting for changes he felt would bring about civil rights and justice for workers. At the end of this month, California state legislators plan to honor Cesar Chavez’s birthday as a day of public service.

The work Cesar Chavez did organizing farmworkers is credited with spurring better working conditions and increased wages, putting people who perform difficult work but still struggle to provide for their families a step closer to achieving the American Dream in California.

Cesar Chavez has been portrayed as the founder of The United Farm Workers union to help struggling farm workers achieve a better life.
Growing up in the fields in the Central Valley town of Delano, this fight begun by Cesar Chavez is personal to me. I too come from an immigrant background, I’ve eaten with the farmworkers who fought alongside Cesar Chavez and heard their stories.

Today, however, Cesar Chavez would be saddened to see what the UFW has become.

After voting overwhelmingly to leave the UFW, Gerawan farmworkers spent five long years in court fighting the UFW and the ALRB, who refused to count their votes until they were ordered to by a judge.
The Gerawan workers, just like the farmworker activists before they were fighting for a better life – and against a UFW contract that would have lowered their pay.

While in Cesar Chavez’s time the UFW gave farmworkers a voice, today’s UFW instead seeks to silence the workers.

When Gerawan farmworker activist Silvia Lopez, one of the leaders of the fight to leave the UFW, tried to speak with former Governor Jerry Brown, a top UFW leader physically blocked her way. The whole incident was captured on video and reported by the Sacramento Bee.

Cesar Chavez spoke out against humiliation and oppression, such as the methods of today’s UFW bosses.

The Gerawan farmworkers are far from alone. Today, the UFW represents just 1 percent of farmworkers, and more petition the ALRB to leave all the time. As reported by the Los Angeles Times, former ALRB Chairman William B. Gould IV, who resigned from the agency in disgust, stated the ALRB now spends more time on petitions from workers trying to leave the union than those trying to join.

In fact, the UFW even abuses its own workers, who the Los Angeles Times reported had to take the union to court to force the union to pay almost $2 million in unpaid wages and penalties.

Cesar Chavez devoted his life to fighting for workers rights. He supported workers right to choose whether or not to join a union. Civil rights for farmworkers cannot be achieved when the government looks the other way when workers are abused, regardless of who is committing the acts of oppression.

That’s why we cannot honor Cesar Chavez’s legacy without speaking out against the abuses of today’s UFW.

Jesse Rojas is a farm worker rights activist, spokesperson for Pick Justice, and founder of California Farm Workers & Families PAC. Rojas is a tireless advocate for liberty and civil rights and often provides news commentary on issues such as entrepreneurship, labor relations, and politics.