Hanson: No Investment in Water Infrastructure 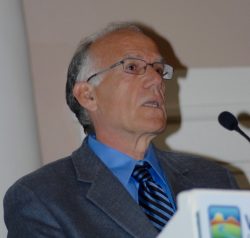 Hanson: No Investment in Water Infrastructure

87
SHARES
ShareTweetSend to a friend

Hanson explained, “When the federal Central Valley Project (CVP) was envisioned in the forties, fifties, and sixties, and the California State Water Project (SWP) in the sixties and seventies, there was a consensus that the state was growing, agriculture was important and two thirds of the people lived where one third of the rain and snow was. To fix the state’s water needs, they had to transfer water. We built the aqueducts. They were brilliantly engineered and we did not have a water problem.”

“The entire model changed in the 1980s,” Hanson said. "A decade I have picked because the New Melones Dam was [filled in] 1983. New Melones was the last major reservoir that was almost not built. Two or three issues happened. One, the state’s population grew rapidly, up to 30 million, and now 40 million people, so it became more crucial to have water. However, more and more water was diverted from agriculture for municipal usage. Then, for a variety of complex reasons, the demography changed. We had a lot of immigration into California; one out of every four Californians was not born in the United States. Also, 4 million people over 20 years of age who were conservative left the state, so we went from a red to a blue state model. Our population went from 25 million to 40 million.”

“Not only did we not invest in infrastructure, such as general roads, freeways, and airports,” Hanson said, “but specifically in the California water project. This third and final phase of water infrastructure would have given us, depending on how many of the reservoirs such as Sites, Temperance Flat or Shasta Dam raising would be constructed ... enough water. If we did not have to talk about it. It would have been fine."