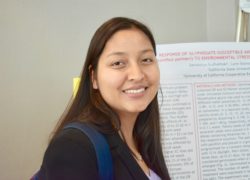 Sami Budhathoki is in the last semester of her undergrad degree at Fresno State. She spoke with California Ag Today recently about her research on how the Palmer Amaranth can adapt to saline soils in the San Joaquin Valley. Palmer amaranth as among the most troublesome weeds in agriculture because it is a very prolific seed producer and very tough to control due to widespread glyphosate escapes. It is found throughout California.

Her major advisor is Anil Shrestha, a professor in weed science at Fresno State. Budhathoki presented her research at a recent California Weed Science Society Meeting in Sacramento.

Based on the pictures on Budhathoki’s poster, the Amaranth grew better in soils with higher salinities.

“That gives us the hint that Fresno is more resistant for the Palmer Amaranth plants because the west side has a lot of salt in its soil,” she said.

That is why it is hard to control in those areas, especially because they propagate so easily.

“Before treating the soil with salt, the plants were all the same height and same size. After the treatment, you can see the differences in how each plant reacted to the salt,” she said.

We asked Budhathoki what it was like working with such a troublesome weed in the ag industry.

“It was my first time working with Palmer Amaranth; it was a good experience,” she said.

Budhathoki says that she thinks there will be more research on this weed in the future so that farmers can find out how to better control it.