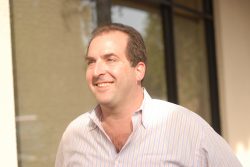 Reframing Farming with a Food Narrative

Peterangelo Vallis is California Ag Today's Ambassador for Agriculture. He's also the executive director of the San Joaquin Valley Wine Growers Association. He spoke recently on the need for increased water conservation by growers and cities in a multi-year drought. He also noted the need for a food narrative.

“That's what we have done. We had to do that over the last few years. I mean, it's not uncommon for there to be a wet year in the middle of a multi-year drought,” Vallis said. “Let's face it. We're clearly in a multi-year drought, and fortunately, there are water supplies, so it's probably not going to be as bad this year as it was a couple years ago, but that's not going to feel great especially with permanent crop agriculture. You got make sure you have a consistent supply of water going year-round at a time.”

Vallis said the Delta area water situation needs to be reframed with a food narrative.

“Let's stop blaming a small fish and let's start putting the blame where it really belongs with the inability for all of us to come together and come up with some sort of solution,” Vallis said.

“I mean fish is a nice scapegoat, and it's a great talking point, but it clearly hasn't been doing better with water restrictions to growers. The problem is that we haven't been framing the conversation in a way that really puts us in the best light, and we've got to do that because nobody is going to say that fish is more important than farmers,” Vallis said. “Realistically when someone insinuates that, they just look silly because everybody knows that we need to eat and we need to be able to provide food for people."

“What the problem is when we start adding things to the conversation, yawn on facts and we start appealing to emotion. Everybody can figure out something that's more important than something else. It's just a form of what needs to happen in a normal society,” he said.