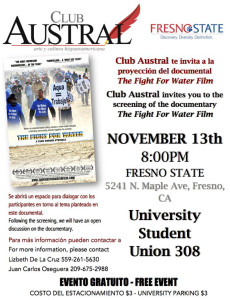 Set during the California Water Crisis of 2009, The Fight for Water highlights the human impact a federal ruling had on a migrant farming community when their water supply was shut off, and the march they staged in order to fight for their water. Oseguera, a California Central Valley filmmaker, filmed this event and documented their story. The film features Hollywood comedian turned activist Paul Rodriguez and former Gov. Arnold Schwarzenegger.

Club Austral is a Fresno State organization founded by Spanish majors in 2008. The purposes of the organization are: to promote cultural awareness at Fresno State about the Hispanic Culture; to strengthen the character and academic skills of all club members according to their area of expertise, ethically and professionally; to further promote academic, as well as, artistic projects that will allow club members to develop their personal strengths and exercise their creative abilities; and to foster academic alliances with Department of Modern and Classical Languages and Literatures (MCLL), in the effort to find professional guidance and academic support.