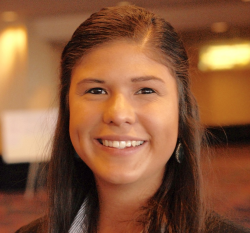 711
SHARES
ShareTweetSend to a friend

Jessie Theisman grew up in San Diego and is now a senior at Fresno State studying Animal Science. She did not come from a farm family and virtually none of her friends had any knowledge of agriculture.

But then she discovered FFA. “I began my interest in ag my freshman year through FFA, where I started getting involved with lambs. Eventually it turned into goats. Then it turned into cattle,” Theisman said.  “After that, I decided I wanted to be an Animal Science major, and I transferred up to Reedley College, where I studied Animal Science and even became involved with the Young Cattlemen’s Committee.”

“I then transferred to Fresno State where I continue my studies in Animal Science and my interest within the YCC. I should be graduating next fall. I'll take another year to get my credentials, and I'll be an Animal Science teacher,” she noted.

Another individual who fueled Theisman's passion in agriculture was her great-grandmother, who had a farm in Anderson, which is in Shasta County, just south of Redding.  “Basically, she was the last person we had that was involved in ag.”

Theisman noted that when she got involved with FFA, all the doors opened up for her in high school.

And Theisman is still working with livestock while at Fresno State. “I do breed goats, and I want to give kids the chance to show their animals, get involved in ag, and hopefully, it opens more doors for them, as well as builds confidence.”

“I really hold 4-H and FFA very close to my heart. Those were probably the best years of my life,” she said.

“And I'm still involved with the FFA. I go back to my high school. I volunteer all the time. I do  go to the state conference [in Fresno] and I work that through Fresno State."

"All of that was honestly the best years of my life. There is not anything I would ever change ... I would never give that up,” she said.