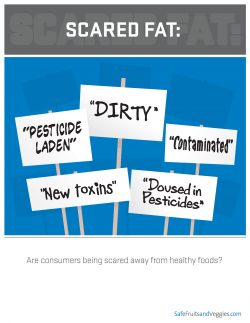 New peer reviewed research, "Low-Income Shoppers and Fruit and Vegetables: What Do They Think?" published in Nutrition Today, shows fear-based messaging tactics used by activist groups and some organic marketers that invoke safety concerns about non-organic produce may be having a negative impact on produce consumption—fruits and veggies—among low income consumers, according to the Alliance for Food and Farming (AFF).

The findings are also concerning since the safety claims carried predominantly by groups like the Environmental Working Group (EWG) and Only Organic about pesticide residues have been repeatedly proven to be scientifically inaccurate. For the last 20 years, EWG annually releases a so-called “dirty dozen” list which urges consumers to eat only organic versions of popular produce items accompanied by misleading and unscientific claims regarding pesticide residue levels. A peer reviewed analysis of EWG’s list entitled, "Dietary Exposure to Pesticide Residues from Commodities Alleged to Contain the Highest Contamination Levels" and published by AFF showed that substitution of organic forms of produce for non-organic produce did not result in any decrease in risk because residue levels are so minute on these fruits and vegetables, if they are present at all.

This IIT research compliments the peer reviewed study by John Hopkins University’s Center for a Livable Future, “They Just Say Organic Food Is Healthier”: Perceptions of Healthy Food among Supermarket Shoppers in Southwest Baltimore," published in January 2015 [orig. Dec. 2014] in the journal, Culture, Agriculture, Food and Environment. Those researchers conducted interviews with study participants to learn more about the way organic food is understood within consumers’ definitions of healthy food. John Hopkins researchers also focused on low income consumers because “this group is particularly important demographically given the disparate burden of diet-related diseases they carry and the frequency of diet-related messages they receive.”

The Alliance for Food and Farming (AFF) is a non-profit organization formed in 1989 which represents organic and conventional farmers and farms of all sizes.  Alliance contributors are limited to farmers of fruits and vegetables, companies that sell, market or ship fruits and vegetables or organizations that represent produce farmers.  AFF's mission is to deliver credible information to consumers about the safety of all fruits and vegetables.  AFF does not engage in lobbying nor does it accept any money or support from the pesticide industry.  In the interest of transparency, AFF's entire 2011 tax return is posted on safefruitsandveggies.com.