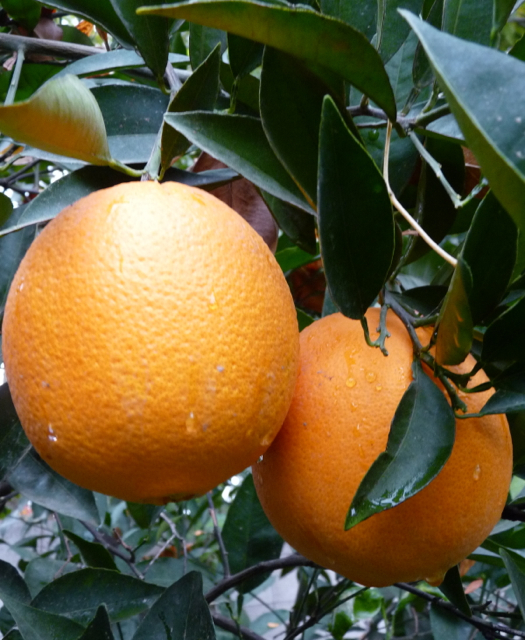 San Joaquin Valley citrus, which last year suffered multimillion-dollar losses due to freeze, escaped a similar fate at the turn of the new year, even though temperatures dropped to well below freezing.

The entire state felt the impact of a cold front that moved through California from Canada, and it was a particular concern in the citrus belt that extends north from Kern County to Madera County.

CCM President Joel Nelsen said there could be "isolated areas of damage" to mandarin groves, particularly to trees and fruit farthest from wind machines, but he said any losses "should not affect volume or price significantly."

The two primary citrus crops grown in the citrus belt are navel oranges and mandarins. Of the two, navels are more cold-tolerant and typically become vulnerable to frost only when temperatures drop below 28 degrees for several hours or for several nights in a row. Mandarins, on the other hand, can suffer freeze damage once temperatures dip below 32 degrees.

The current citrus harvest began a few weeks ago, and an estimated 75 percent of the fruit remained on the trees when the cold weather began. Growers use wind machines or irrigation systems, or a combination of both, as frost-protection measures. By irrigating, growers can elevate the ground temperature slightly. Wind machines help to keep the air moving, breaking up pockets of cold air that can create problems.

Citrus Mutual estimated there are more than 22,000 wind machines throughout the citrus belt, most of which operate on propane. The organization estimated Monday that farmers had spent more than $16.5 million on frost-protection measures during the six-night freeze operation.

"Our information is that pumping groundwater has been minimal," he said.

One of the most water-starved areas is Terra Bella in Tulare County, where many farmers bought emergency water at high prices last summer to keep citrus trees from dying in the drought. Many of those growers have a little bit of that water left, and said they were using it to protect their groves from frost.

Everett said it has been his experience that citrus trees are able to tolerate the cold fairly well, but the fruit can be vulnerable. Blakely of CCM agreed with that assessment.

"In California, it is typically a case of lost fruit rather than a killing of the trees," he said. "Our conditions here in this state are such that in the wintertime we have enough cold temperatures where the trees can go into a quasi-dormancy, where they can withstand quite low temperatures before we have any damage to the fruiting wood."

The freezing temperatures came just over a year from a December 2013 freeze that caused an estimated $441 million in citrus losses.

Consumer demand for navels has been quite good, bringing "decent" prices to farmers, Blakely said.

"Prices were higher a few weeks ago, but we are starting to see them come off a little bit. Consumer acceptance of the fruit has been very good and demand has remained steady. Movement in the domestic market last year was actually higher than it was in the previous year. In the wintertime, there really aren't any other producing areas that are providing navel oranges to the United States. However, if there is an event that causes a reduction in the California crop, some of that market could possibly be taken up by some of the European mandarins," he said.

San Joaquin Valley citrus wasn't the only crop or region that faced potential crop losses due to the freezing weather. Temperatures of below 32 degrees were recorded in the Coachella Valley as well as the desert areas of the Imperial Valley and Yuma, Ariz. The cold temperatures caused some reported production losses to all varieties of lettuce as well as to spinach. As a result, customers might see some short-term shortages in the next couple weeks, farmers and shippers said.

The Coachella and Imperial valleys and the Yuma area produce about 90 percent of the nation's winter vegetables. Cold weather slows plant growth and delays the daily harvest activity until the plants begin to thaw in late morning or early afternoon.