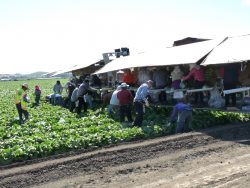 TODAY, Manuel Cunha Jr., president of the Nisei Farmers League and Will Scott, Jr., president of the African American Farmers of California are meeting in Sacramento with members of the California Assembly to explain the disastrous consequences of AB 1066, referred to as Agricultural workers: wages, hours, and working conditions, on small and minority farmers.

The effects of this legislation, particularly the Phase-In Overtime for Agricultural Workers Act of 2016,  will be detrimental not only to the farmworker who counts on the extra hours, but to the farmer who, with the increasing costs of regulations and the lack of water, will be forced to cut back on crops and their workforce, according to their joint press release.

“The small and minority farmer will be adversely affected by this ill-conceived legislation," said Manuel Cunha Jr. "The small farmer works hand in hand with their workforce in the fields and [is] in a better position —with direct input from the workers—to determine schedules rather than politicians in Sacramento looking for a soundbite," he explained. “Without meeting with our small and minority farmers and farmworkers, these politicians pass legislation that will cost our workforce money, our farmers crops, and the residents of California the fresh fruits and vegetables they enjoy everyday.”

Both Manuel Cunha Jr. and Will Scott believe the Legislators need to consider the small and minority farmers when casting their votes. “We are confident that after we meet with the Assembly members,” said Will Scott, Jr., they will understand how harmful this legislation is to our farmers and farmworkers. It is our hope that by educating the members, they will understand the importance of this bill and vote No on AB 1066."

The League continues to inform grower members about ever changing regulations and policies providing legal assistance for labor and workplace related issues. Our leadership and staff maintains a close working relationship with local, state and federal agencies and legislators to assure grower interests are adequately understood and defended.

The NFL also collaborates with other grower and agricultural organizations in both California and other states to help provide a powerful, unified voice for the agricultural comm

Strength, clear focus and growers looking out for growers and farm workers... that is what the Nisei Farmers League is all about.

The Fresno-based African American Farmers of California organization has doubled its membership since it opened a 16-acre demonstration farm in Fresno County, which serves as a testing area where new farmers can get hands-on experience growing a variety of produce.

"The nutritional value of this food was passed down the generations," said Will Scott, Jr. "It helped build our immune system; kept us healthy and strong. We hope to pass it on to sustain the next generation."