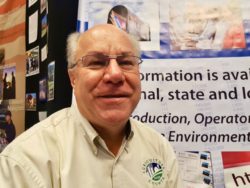 California Ag Today recently spoke with Scot Rumburg, the Nevada State Statistician for the USDA National Agricultural Statistics Service. He stressed the importance of the 2017 Ag Census, which has recently been mailed out to anyone who makes a $1,000 or more from any agricultural enterprise.

“USDA has mailed four million copies of the census that will cover what we suspect is about three million farms. We have an over coverage of about one million trying to find everybody, trying to turn over every rock,” Rumburg said.

The Ag Census is conducted once every five years. The census is based off of any ag commodity, from bees and honey to crops, fruit and nuts to livestock of any type. If you produce or have the potential to produce $1,000, the statistic service wants to hear from you. There are people out there planting permanent plantings that are not up and running yet, but they are still considered.

The census is one of the only ways that the USDA can collect data.

“We have to try and get agriculture across the entire U.S. We do a lot of surveys between the five-year census,” Rumburg explained. “This is the only census where we go out and find every agricultural operator in the U.S., and it provides numbers and data that we cannot get on a regular survey."

“There are people that want many different kinds of data to provide a near complete picture of what is going on in agriculture at nearly every level. The census is all- encompassing,” he said.

Many of the paper censuses arriving to farmers will direct them to an online digital census, by using a code that is given with the census. Operators are encouraged to use the online version.

The 2017 Ag Census is a reflection on 2017; it is not a future forecast. The census asks age, ethnicity, veteran status and many other items that give more information on American farms and farmers.

All farmers and those related to farms, including beekeeping operations, are encouraged to complete the census.

“Money for conservation programs and many other areas to be distributed at the national level is based on this data. It’s important for every operation to get the funding at, a minimum, the state level. All information is private and will not be disclosed to anyone,” Rumburg said.