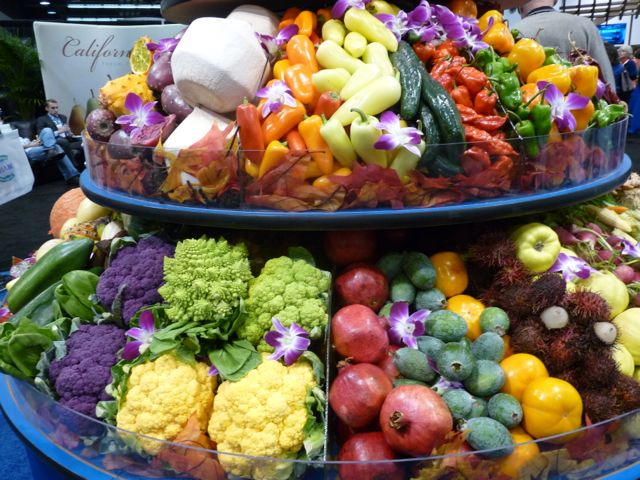 This week, Marilyn Dolan, the Executive Director of the Alliance For Food and Farming[1] (AFF) sent a letter to Environmental Working Group[2] (EWG) President Ken Cook requesting they discontinue their annual release of the so-called "dirty dozen" list. Scott Faber, EWG's Vice President of Government Affairs responded online TODAY that "EWG’s top shelf advice is to eat your fruits and veggies. But, as EWG’s research shows, not all veggies are the same, and some have more pesticide residues than others. That’s why we will ignore the call to discontinue publishing our Shopper’s Guide."

This correspondence comes following EWG's statement that organic and conventional produce are best foods for consumers and that organization's new and strongly worded recommendation about the need for increased consumption of all fruits and vegetables - whether they are organically or conventionally grown. The statement accompanied the release of EWG's Food Scores: Rate Your Plate, an easy-to-use food database and mobile app on October 27, 2014 that rates and shares information for more than 80,000 foods from about 1,500 brands in a simple, searchable, online format. “The new database is the most comprehensive food-rating database available to consumers,” EWG said in a statement. “Its scoring system factors in not only nutrition, but also ingredients of concern, such as food additives, and contaminants. It also estimates the degree to which foods have been processed.”

Each year, EWG publishes Shopper's Guide To Pesticides In Produce “to help consumers find conventional fruits and vegetables with low concentrations of pesticide residues,” explained Sonya Lunder, EWG’s senior analyst and principle author of the report.  “If a particular item is likely to be high in pesticides, people can go for organic.”

While the annual Shopper’s Guide features a “Clean Fifteen” section of conventional produce with the least amount of pesticide residues, it is famous for its annual “Dirty Dozen” list of the most pesticide-contaminated produce and its "Dirty Dozen™ Plus" highlights hot peppers and leafy greens - kale and collard greens - often tainted with unusually hazardous pesticides. The Alliance for Food and Fiber has worked hard to debunk the dirty dozen list," said Dolan, "with good scientific evidence that even though produce may have crop protection product residues on a small percentage of the total volume of produce, the residue is far less than FDA standards."

Here is the letter from AFF to EWG, in its entirety.

We noted your organization’s acknowledgment in the “Food Scores” database that both conventional and organic fruits and vegetables should be considered best food choices for consumers.  We also saw the Environmental Working Group’s new and very strong statement concerning the need to increase daily produce consumption for most Americans now posted on your website.

As you are well aware, our organization, the Alliance for Food and Farming (AFF), has repeatedly requested that you discontinue the publication of your annual “dirty dozen” list because it is misleading to consumers, is not peer-reviewed and is not based on real risk.  The conventional and organic fruit and vegetable farmers we represent produce a very safe product that experts around the world agree we should all be eating more of for better health.  In addition, the USDA, FDA and EPA all clearly state that residues do not pose a food safety concern.

For these reasons, along with EWG’s new and strong acknowledgement of the health and safety of conventional produce, the AFF renews its call for your organization to end your annual release of the “dirty dozen” list.

While there is still much information to come with respect to the validity and credibility of your new “Food Scores” report, we are pleased to see that, for produce, this new report supports decades of nutritional studies showing the health benefits of a diet rich in fruits and vegetables – regardless of whether they are organic or conventional. We are sure you would agree that it is illogical for your organization to urge consumers to eat more conventional produce while simultaneously mislabeling these safe and healthy foods “dirty,” “toxic laden,” and “contaminated” among other things.

Therefore we ask you to stop unfairly disparaging conventionally grown fruits and vegetables with your annual “dirty dozen” list release.  Instead, please continue on the positive path you’ve established with your new statement urging increased consumption. That is the right message for consumers and also meets your organization’s stated objective to “empower people to live healthier lives.”

We look forward to hearing from you regarding your future intentions for the so-called “dirty dozen” list.

Here is the Scott Faber, EWG's Vice President of Government Affairs's response to AFF TODAY in its entirety:

Food industry lobbyists are none too pleased with EWG’s new scoring system for foods, accusing EWG’s Food Scores of:

Apparently, helping consumers identify those foods with too much fat, sugar and salt  -- as well as foods with unregulated food chemicals or too much mercury – is giving Big Food’s hired guns indigestion.

Of course, food manufacturers don’t like scoring systems like NuVal or Guiding Stars, so it’s no surprise they are already attacking Food Scores.

Could it be that so many packaged foods score poorly?

Here’s what we found: far too many packaged foods have too much sugar, salt and fat and many foods contain chemicals or other ingredients of concern.  Overall, 25 percent of the 80,000 products we reviewed received and 8, 9 or 10. (For EWG, less is more: the best foods score a 1, while the worst foods score a 10.)

Big Food’s lobbyists contend that we relied upon “isolated studies” to include added sugars and some low-calorie sweeteners in our scores. By “isolated studies,” they mean peer-reviewed research by the Institute of Medicine, the health arm of the National Academy of Sciences.

Big Food’s lobbyists also claim that we used “online sources” to address the risks posed by arsenic and other food contaminants. By  “online sources,” they mean the Food and Drug Administration.

In fact, our scoring system is based upon hundreds of studies conducted by leading experts, including those at the World Health Organization. And, unlike industry-funded studies of food chemicals, the studies that served as our references are available for everyone to see.

Well, duh. Unlike so-called “natural” foods peddled by food giants, certified organic foods cannot be produced with toxic pesticides, antibiotics and hormones. The U.S. Department of Agriculture has even stricter rules when it comes to what can go into “flavors.”  Nor can organic food use genetically engineered ingredients, though GE content doesn’t factor into our scoring system.

Even fruit and vegetable lobbyists took time to bash EWG’s new food scoring tool.  Top scores for actual fruits and vegetables weren’t enough for the Alliance for Food and Farming, a trade association that represents conventional produce growers, which accused EWG of making “disparaging, inaccurate safety claims” in our Shopper’s Guide to Pesticides in Produce. This is the same group that blamed EWG for scaring people away from healthy food and spent $180,000 of your tax dollars erroneously claiming the Shopper’s Guide discourages people from eating their fruits and veggies.

As regular users of the Shopper’s Guide know, EWG’s  top shelf advice is to eat your fruits and veggies. But, as EWG’s research shows, not all veggies are the same, and some have more pesticide residues than others. That’s why we will ignore the call to discontinue publishing our Shopper’s Guide.

It seems that some food and farm lobbyists can’t handle the food truth.

[1]AFF, a non-profit organization comprised of approximately 50 agriculture associations, commodity groups and individual growers/shippers who represent farms of all sizes and includes conventional and organic production, works to provide a voice for farmers to communicate their commitment to food safety and land stewardship. Through outreach to the media and consumers, the Alliance provides information and scientific analyses on many food safety subjects, including foodborne illness and pesticide use, among others. "The Alliance for Food and Fiber has worked hard to debunk the dirty dozen list with good scientific evidence that even though produce may have crop protection product residues on a small percentage of the total volume of produce, the residue is far less than FDA standards."

[2]The Environmental Working Group http://www.ewg.org/about-us, a non-profit, non-partisan organization dedicated to protecting human health and the environment, aims to empower people to live healthier lives in a healthier environment by driving consumer choice and civic action with: