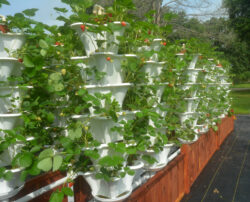 Driscoll's and Plenty Team Up to Grow Strawberries Indoors

The concept of growing crops in vertical farms with plants indoors stacked on top of each other has been around for years. But this industry got some serious validation when Driscoll’s the global berry leader announced a partnership with Plenty - a San Francisco-based vertical farming company.

Plenty Chief Scientific Officer Dr. Nate Storey says this is a big deal for the evolution of vertical farming.

“It's a big deal for several reasons. The first reason is, you know, people just need more delicious things - access to more delicious things. You know, that's a source of excitement and joy and just part of the human experience. And the other thing is, I think it signals to folks that, you know, indoor ag is a thing,” said Storey. “It's not a concept anymore-it's a thing. And when you have people who know their business, who are serious about production, who have been in the space for a very long time and are kind of the best at what they do investing and engaging. You know, that's a pretty big deal,” Storey.

Traditionally, one of the criticisms of vertical farming was it was somewhat limited commercially to leafy greens. Nate says this deal with Driscoll’s is exciting to expand their offerings into strawberries, and eventually, far beyond.

“At the end of the day, the number of crops that are going to move indoors, I think is going to surprise everyone. And, strawberries are just the first; definitely not the last,” noted Storey.