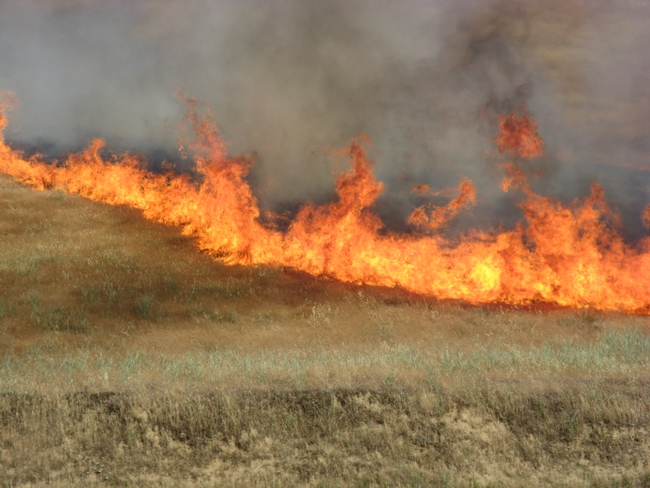 To help house displaced farm animals during times of disaster, portable livestock pens have been deployed to seven fairgrounds around California. The pens, purchased through a partnership between the California Farm Bureau Federation’s charitable foundation and the California Department of Food and Agriculture, were formally dedicated during a ceremony today at the Yuba-Sutter Fairgrounds in Yuba City.

“During wildfires, floods and other emergencies, farmers and ranchers take great care to be sure their animals can be safely evacuated, often to nearby fairgrounds,” CFBF President Jamie Johansson said. “These portable livestock pens will make it easier for fairgrounds to fulfill their role as shelters during disasters.”

After the Camp Fire ravaged part of rural California last year, the California Bountiful Foundation—a charitable foundation established by CFBF—created a Farm and Rural Disaster Fund. Donations from 50 individuals and companies allowed the foundation to contribute $75,000 toward purchase of the portable livestock pens.

With additional funds from CDFA, a total of 280 pens were acquired. CDFA has distributed 40 pens apiece to fairgrounds in Anderson, Auburn, Lakeport, Merced, San Mateo, Ventura and Yuba City. Manufactured by Plymouth Industries of Nebraska, the panels to create the pens are stored on racks so they can be quickly mobilized and transported during a disaster.

“Already this fall, we’ve seen the pens used to help livestock during the Kincade Fire in Sonoma County,” Johansson said. “We also look forward to having them used for happier occasions, such as ongoing events at county fairgrounds around the state.”

For more information about the Farm and Rural Disaster Fund, see the CFBF website atwww.cfbf.com.

According to a survey from the Alliance for Food and Farming (AFF), there is almost unanimous agreement among registered dietitians (RDs) that it is important for consumers to know that conventionally grown produce is safe because not all consumers can afford to buy organic. ...

CPDPC and CPDPP Continuation Approved By order of the Secretary of the California Department of Food and ...

Grower Stuart Woolf is wondering what happen to all the reservoir water that was so plentiful a few years ago? @woolf_farming @almonds @almondboard #Drought21


What Happen to All the Reservoir Water? - AG INFORMATION NETWORK OF TH

Stuart Woolf is President and CEO of Woolf Farming Co. in Huron, Calif. He question where did all the water go...