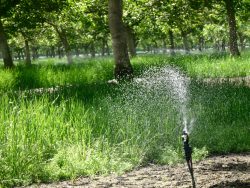 21
SHARES
ShareTweetSend to a friend

Comments Come After Secretary of the Interior's Visit

News Release from the Office of Rep. Jeff Denham

The Department of Interior’s comment notes that the proposed water grab “directly interfere[s] with the New Melones Project’s ability to store water” and “elevate[s] the Project’s fish and wildlife purposes over the Project’s irrigation and domestic purposes contrary to the prioritization scheme carefully established by Congress.” Interior’s comment also specifies that siphoning off at least 40 percent of Central Valley’s rivers during peak season would result in significant reductions in water storage at New Melones and result in diminished power generation as well as recreational opportunities. DOI recommends the Board reconsider and postpone the scheduled August 21-22 public meeting to allow for “additional due diligence and dialogue.”

“Sacramento’s radical water grab would cripple the Central Valley’s economy, farms and community.  Secretary Zinke saw that when he visited New Melones and Don Pedro reservoirs with me last week,” Denham said. “They cannot drain our reservoirs and ignore our concerns.  I will continue fighting to make sure Central Valley voices are heard.”

“Under Sacramento’s plan, the Valley will suffer skyrocketing water and electricity rates.” Denham explained. “After a decade and millions of our money spent on a study that they required, the board ignored the science based proposal that would save our fish while preserving our water rights.  We will not allow them to take our water and destroy our way of life”

Last week, Denham’s amendment to stop the state's dangerous water grab passed the U.S. House of Representatives as part of a Department of the Interior appropriations bill, and put a major spotlight on this issue. The amendment, currently awaiting a vote in the Senate, prohibits federal agencies from participating in the state’s plan to deplete the federally owned New Melones reservoir, which provides water for the Central Valley Project and generates hydropower. Sacramento’s plan would drain significantly more water from New Melones each year, potentially leaving it completely dry some years. This would put in jeopardy critical water supplies for Central Valley farmers and communities who rely on the water for their homes, businesses, farms, and electric power. The amendment takes this issue head-on to protect Valley water.

Denham will continue fighting to protect Central Valley water, support science-driven river management plans that revitalize our rivers without recklessly wasting water, and push major policies like the New WATER Act that will solve California’s water storage crisis and keep the Valley fertile and prosperous for generations to come.

To read the full comment from the Department of the Interior, click here. For more information about what Denham is doing to fight for water in the Valley, visit www.Denham.house.gov/water, where you can also sign up to receive periodic updates on his work in Washington to improve local water infrastructure, storage and delivery.