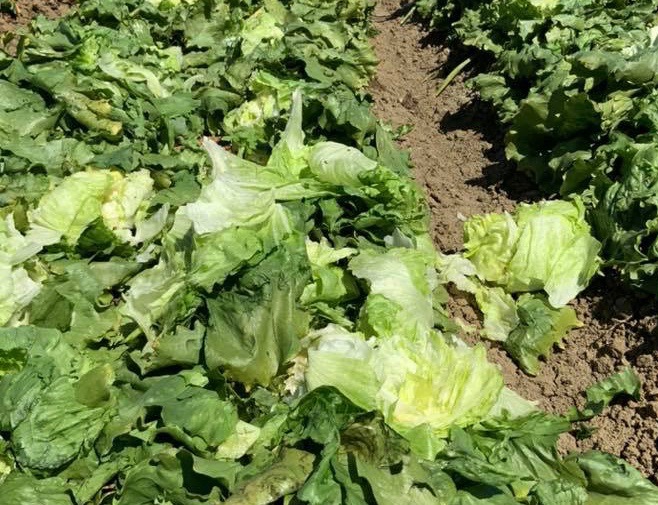 While most Californians are wholeheartedly embracing the wet start to winter, one group is welcoming the rain more warily (and wearily) – lettuce growers in the Salinas Valley.

“It’s a blessing, yes, we need the water,” said Tony Alameda, managing partner of Topflavor Farms, which grows a variety of produce in Monterey and San Benito counties. “But, oh gosh: with that water, here come the weeds, here comes the habitat, here comes all the other problems that go along with it.”

Weeds are overwintering havens for a tiny insect called the Western flower thrips, which in turn carries the impatiens necrotic spot virus (INSV) – a plant virus that caused $100 million in lost gross revenue for Salinas Valley growers in 2020.

The agricultural community called it “the biggest problem we’ve seen in a long, long time,” said Mary Zischke, facilitator of a task force convened by the Grower-Shipper Association to address INSV and a related affliction, Pythium wilt.

Since INSV was first observed in the state in 2006, the virus – which poses no threat to people – triggered significant crop losses in 2019, leading up to a catastrophic 2020. As Alameda’s lettuces began to show the telltale “bronzing” of the leaves, efforts to bag up or remove the infected plants had no effect on the virus’ implacable spread.

“Nothing seemed to work,” he recalled, “and you just watch those fields collapse, week after week, until you’re just like, ‘Ugh, there’s nothing here to even harvest.’”

After “100% crop failure” that year in his prime fields at the heart of the Salinas Valley, Alameda tried to dodge the virus in 2021 – shifting lettuce plantings to San Benito County and instead using his most valuable land for unaffected crops such as cilantro, leeks and radishes. By decamping to San Benito, Alameda was able to harvest 70% of his usual lettuce yield.

Generally, growers enjoyed a reprieve from virus pressures in 2021. Even in this “good” year, however, about one-third of all lettuce plantings in the Salinas Valley had at least a low level of infection, according to Zischke.

“Since we were attributing a lot of our so-called good fortune – on having less damage this year – to the cooler weather, we know we can’t count on that to get us out of this problem,” Zischke said. “All the models point to the fact that we’re in a warming climate, so we were fortunate this year.”

Heat waves were a major driver of the INSV disaster of 2020. Although researchers have established a link between warmer temperatures and population increases of thrips, science still has a lot to learn about those disease vectors.

“Thrips are something we’re trying to understand as much as we can, but it’s pretty tough because they’re a little mysterious in the way they get around and where they overwinter,” said Richard Smith, a University of California Cooperative vegetable crops and weed science farm advisor for the Central Coast region.

Recent studies have identified several weeds as key “reservoirs” of thrips, including malva, marestail, and hairy fleabane. The ubiquitous mustards, fortunately, appear to be poor hosts for thrips, although their pollen serve as potential food sources.

Controlling those weeds – which are beginning to spring up as the days lengthen – is a top priority during the winter months, according to Smith. Aggressive weed management in the preceding winter was an important factor in limiting the virus’ spread in 2021.

And because weeds recognize no boundaries, experts are also urging managers of non-agricultural lands to keep their properties as clean as possible, including industrial sites, equipment yards and the edges of roadways – namely U.S. Route 101, which runs through the center of the valley. Some growers have been volunteering to weed their neighbors’ vineyards.

“We’re encouraging everybody – as best they can – to knock down known weed hosts; that’s really critical,” Zischke said.

Within the grower community, there is “nervous optimism” for the coming year, said Alameda, as he continues to hope for an innovation that would aid in the fight against INSV – whether a more targeted pesticide application or a beneficial insect that could deter the thrips.

However, both Alameda and Zischke pointed to the breeding of more resistant lettuce varieties as the ultimate solution to INSV – albeit one that is years away.

Research funding from the state and USDA – as well as projects supported by the California Leafy Greens Research Program – can help expedite that process. But, for Alameda, the INSV crisis underscores the need for more resources and farm advisors such as Smith, who has spent more than three decades cultivating relationships and building trust within Salinas Valley communities.

Alameda would like to see a renewed focus on bringing “bright, young, passionate people who live and breathe this stuff” to the region, so growers are better equipped to handle the inevitable next calamity.

“Hopefully this is a wakeup call to all,” he said. “This is a valued industry – you have to take care of it; it cannot be taken for granted. The ‘salad bowl of the world’ cannot rest on its laurels.”