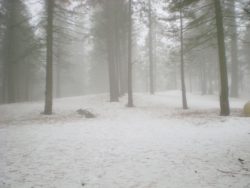 24
SHARES
ShareTweetSend to a friend

“We have so much overgrowth in the forest that the snowpack wasn't even making it to the ground,” he said.

The snow would sit on top of the vegetation and evaporate, thus never making it to the forest floor.

“Removing the vegetation is going to be an important component of restoring the health to the groundwater situation, because 60 percent of California's water comes from the Sierra Nevadas,” Rogers said.

A 2013 study showed that 30 percent more water can be collected from the forest. This increase in water has been present in areas that have a healthy level of vegetation and not overcrowded. The overcrowded conditions have led to catastrophic fires, and it is important to manage those areas.

The burn areas of those fires are becoming a hazard.

“Not only does the soil runoff fill our reservoirs and mean dredging and all of those things, but what will return won't be healthy vegetation,” Rogers said.

The vegetation that does return will be chaparral and absorb more water than the trees. The water would most likely be evaporated rather than absorbed.

“What was happening was there was no room for the snow to even hit the ground. It would sit on top like an ice sheet. It would evaporate from the top down and never get to the bottom,” Rogers explained.

Underground systems benefit from the forests; the runoff goes down through the rocks and crevices that in turn fill the rivers, streams, and wells.

“Our groundwater is dependent on that snowmelt going into the ground,” Rogers said. “Filtered underground rivers are a result of the water absorbed into the ground; the forest floors need to be managed.”

Editor's Note: The image depicted in this article is exactly how a forest should be managed.