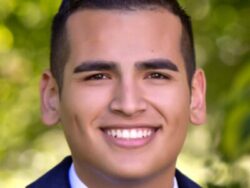 By Tim Hammerich with the AgInformati0n Network

For the first time in 93 years, the National FFA Organization held their convention, virtually. Formerly known as the Future Farmers of America, the organization elected a new national officer team as part of the virtual activities. That national officer team includes Holtville, California native David Lopez, who says he hopes to encourage others to get involved in agriculture and the FFA, no matter their background.

“I think for me going through this program as a high school student, sometimes it was hard to identify individuals who looked like myself, just because when we saw individuals in leadership positions, it was a lot of your traditional agriculture production kids, which is awesome,” Lopez said.

“However, now that we see how diverse our organizations are becoming, I think it's important to recognize that not everyone comes from the same background or has the same story. So when you're able to identify, you know, what makes you, you, and be proud of that? I think it goes a long way,” noted Lopez.

Lopez was elected the National FFA Western Region Vice President. He hopes to connect individually with as many of the organization’s 760,000 members as possible.

David along with his five teammates will dedicate a full year to serve in this capacity for the youth agricultural leadership organization.