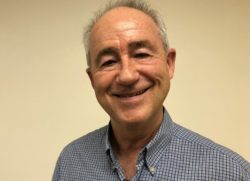 Curly top virus is a common disease in California. In its worst years, entire fields have been lost to curly top in the foothills of the Central Valley, and it can infect a variety of plants from a total of 44 plant families as well as 300 individual species.

Curly top commonly affects tomatoes, peppers, beets, spinach, potatoes, and beans, as well as a variety of weeds. A common characteristic of curly top is stunting of the plant as well as curling and twisting of the leaves, where it gets its name, curly top. Leafhoppers are the main vector of the virus.

Currently, the CDFA conducts a yearly curly top prediction where they monitor numbers and the leafhopper population as well as the prevalence of the virus to give a scope of what the upcoming year might look like.

“We hope that CDFA will continue to carry out the leafhopper screening for the virus and for the population so growers get a prediction of what the curly top incidents will be the coming year,” Gilbertson said. “It’s good that we can tell growers when there's going to be a bad curly top year so they can implement additional strategies.”

These strategies include changing where they're going to plant a field or using timed insecticides, particularly systemic insecticides like the new Verimark (From FMC) insecticide to manage curly top.

“We've already found that that material can slow down the spread of curly top in a field,” Gilbertson explained. “So in a year where it's predicted to be bad—high populations of leafhoppers carrying high amounts of the virus—then you as a grower would then want to consider using some of these insecticide approaches.”