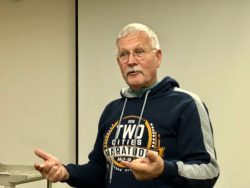 Data Being Gathered to Measure Benefits of Cover Crops

By Tim Hammerich with the Ag Information Network of the West

Cover crops are touted in many areas for the benefits they bring to soil health, but they are not widely used in annual production in California. There are likely many reasons for this, but a big one is water retention. Allocations for irrigation are so tight that watering a crop to cover soil is perceived as not a great use of the precious resource.

But research from Extension Vegetable Crops Specialist Jeff Mitchell and others indicate there are some tradeoffs to consider.

“The aspect of adding organic matter, living roots and biology into the soil in the form of earthworms and other organisms that are burrowing and creating channels and pores; that can offset some of the water use elements there because you're actually enabling the soil to more readily intake or infiltrate water,” said Mitchell.

“Our research has also shown with some colleagues at UC Merced that over time if you're increasing the organic matter through the practice of cover crop in the soil, you can actually affect the water-holding or storage capacity of the soil there. So it's a subtle thing. I'm not at all saying that there's no water use involved with cover crops because there certainly is. But the tradeoffs tend to be, on balance, less than most people think and relatively modest,” noted Mitchell.

Dr. Mitchell is collecting data on farms throughout the state to analyze the impact of practices like cover crops.

AgInfo.net is the largest Radio Network in the West with 140 Affiliate Radio Stations.