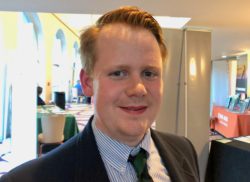 Depending on your location, cover crops can have a big impact on your fields. Steve Haring, second-year Ph.D. student in the Department of Plant Sciences at UC Davis, has been collecting research on how different climates influence the effectiveness of cover crops.

“As we try to design cover crops, there are a lot of different paths we can take, and it’s important to test these different things out and see what is best for the specific things we can use cover crops for in the Central Valley,” Haring said.

He further mentioned that for optimum weed control in the Valley, growers should plant in the early winter months in order to prevent annual winter weeds.

Haring worked with the UC Davis Cooperative Extension on three different sites across both the Central Valley and northern Sacramento Valley collecting data on growth rates for cover crops. He found that because the northern valley had more direct sunlight hit the ground, cover crops thrived, and as a result, weeds were minimized.

The research will not stop there, though, Haring ensured. “The study I’m working on is funded by the Almond Board, and it's continuing for a second year and maybe a third, so we’re trying to repeat it and validate and then also sort and synthesize information because there are people working on weeds but also working on water, insect pests, pollinator health, nematodes, and call sorts of ecosystem services,” he concluded.