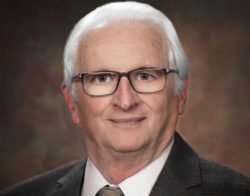 Franco Bernardi, the interim president of the California Citrus Research Board based in Visalia, attended a recent citrus regulatory meeting in Denver, Colorado. He has sat on that board for 27 years and is helping out while a new president is searched for and named.

The CRB just turned 50 years old, and it is all about finding solutions to the trying issues of pests and diseases in California citrus. Bernardi said the meeting was comprehensive in regard to moving plant material between research labs around the country.

“It was a very good meeting and fortunately it had the right people in the room, which doesn't always happen when you have a large meeting like that,” Bernardi said.

It is a very complicated subject, but with the regulators, researchers and plant breeders, it was a good meeting. These decisions are leading to allow genetic material to be moved from one state to the other.

A lot of this surrounds huanglongbing (HLB) genetic material which is causing concern, but Bernardi said there was a consensus on how to do it.

“The regulators are now going to have to put some teeth in the regulation,” he said.

Some regulations may even need to be changed. Many states have the same safeguards. One thing that came out of the meeting is some of these processes and protections of moving material from one place to the other are already in place.