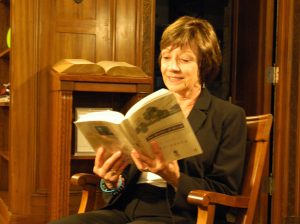 According to the American Library Association, more than 11,300 books have been "challenged" by schools, bookstores and libraries. Banned Books Week was created to celebrate the freedom to read, and celebrates open access to information.

To draw attention to the harms of censorship and celebrate the importance of free speech, the California State Library is hosting an online video “Read-Out” during Banned Book Week, September 21-27.

Many books that have been removed from library shelves and classrooms over the years are now considered classics of modern literature and taught in schools throughout the country.

John Steinbeck’s The Grapes of Wrath is included in that list, and is the same book from which CDFA Secretary Karen Ross was invited to read. In 1939, it was banned due to its harsh portrayal of Dust Bowl refugees and the hardships they faced coming west. It was banned in at least one California county, and Joseph Stalin banned it in the Soviet Union.

California State Librarian Greg Lucas started the week by reading a passage from One Flew Over the Cuckoo’s Nest, and Secretary Ross has joined other Brown Administration cabinet members in reading from banned books throughout the week.

Banned Books Week ends on September 27; make sure to celebrate your right to read and your freedom of speech.