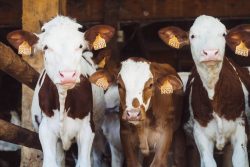 71
SHARES
ShareTweetSend to a friend

If their attendance at the California Cattlemen’s Association’s 100th Annual Convention was any indication, the future is bright for the next generation of cattlemen and cattlewomen. We spoke to Veronica Staggs, a junior at Cal Poly San Luis Obispo, about why she’s a member of the Young Cattlemen’s Club and what they are doing to educate students about the cattle industry.

The club, which is a chapter of the California Young Cattlemen, has about more than 50 members, with both those who grew up on cattle ranches and many who just have a passion for livestock agriculture, Staggs said

Staggs, who is studying animal science at Cal Poly with the goal of becoming a livestock veterinarian, is one of those who doesn’t haven’t a background in cattle.

“I actually love cattle, but it's a great industry to go into and to be a vet for because the people you work with are just so nice, and so genuine, and they're so easy to work with,” Staggs said.

The prospect of working with cattle ranchers was a main reason that drew her to studying animal sciences.

“I just think that cattle ranchers are super easy people to work with,” Staggs said. “They're super genuine. You can work well with them. They treat you like family, so I think being a vet for cattle ranchers would just be a super great job.”

Cal Poly San Luis Obispo is well-known for a great agriculture program in general. The Young Cattlemen’s Club does their part to get to engage fellow ag students about the cattle industry.

“We do a lot of networking with people not a part of agriculture to show them what's going on,” Staggs said. “And most of them are pretty receptive to it, and actually get interested in what's going on and seeing how their food reaches their table.

Recently, the club even brought a calf into the student union to let people meet the animal and to educate the public about food animals. The Young Cattlemen also use social media to get their message across.

“We try to put a lot of information out there for them, because we think that it's important for everyone to understand how food reaches their table and that it's not just from a super market,” Staggs said.