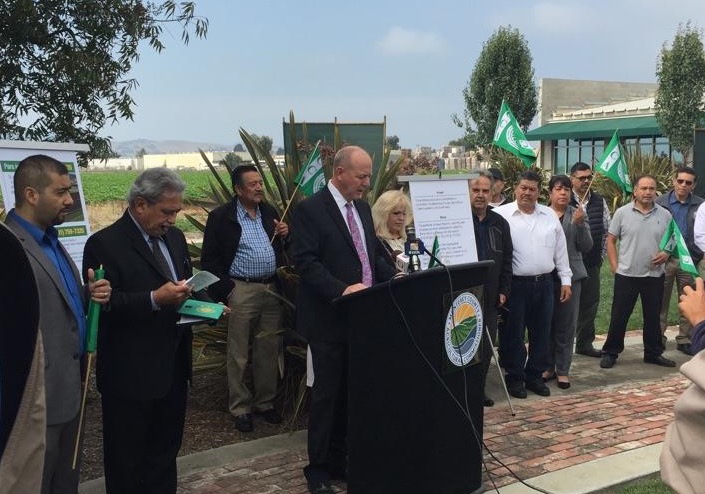 Monterey County Agricultural Commissioner, Eric Lauritzen and the Farmworker Advisory Committee, formed with the assistance of the Center for Community Advocacy (CCA), announced an historic initiative TODAY aimed at providing additional pesticide protections for farmworker safety. The initiative launches a pilot program with leading growers to enhance worker notification through warning signs when pesticides are used in the fields.

“California has the toughest farm pesticide restrictions in the nation, and Monterey County already imposes local rules that further protect farmworkers,” said Lauritzen at TODAY’s press conference. “But we are going to do even more to communicate our commitment to safety in the fields.”

“We are excited about this initiative that adds an additional element of protection for farmworkers by providing the time and date when it is safe to reenter the fields that require posting,” said Lauritzen. “Farmworkers are the backbone of Monterey County’s $4.8 billion Ag industry, and they are entitled to the highest standard of pesticide safety.”

Additionally, every farmworker in Monterey County (approximately 50,000) will receive a business-card-sized information card (in Spanish) advising them to call the Agricultural Commissioner’s Office if they suspect violations of safety rules. The cards also advise employers that it is illegal to retaliate against farmworkers who seek the help of the Agricultural Commissioner’s Office.

If you have questions or complaints on pesticides, the Monterey County Agricultural Commissioner’s Office will help.

The card includes phone numbers and advises workers that state law also protects them against retaliation if they report a pesticide problem.

Currently, regulations for posting pesticide warning signs do not require information indicating the date or time when it is safe for farmworkers to re-enter the fields. The pilot program will include the addition of one sign that will be prominently marked with a red flag and include the date and time that the law allows workers to safely reenter the field. Only the grower or his/her officially designated representative may remove the signs, after first showing the crew leader proof that the re-entry restrictions have expired.

Osvaldo Cisneros, a lettuce worker and member of the Farmworker Advisory Committee, feels that the change is very important. “Some farmworkers have been showing up for work and have been told by their mayordomos (supervisors) to re-enter fields even though warning signs are still up,” said Cisneros. “They have to depend on the word of the mayordomos even though they have no way to verify what they are told. This change will allow farmworkers, themselves, to tell when it is safe to enter fields.”

The posting and information card initiatives were developed in cooperation with the Farmworker Advisory Committee, a group formed jointly by Lauritzen and the non-profit Center for Community Advocacy. “Many farmworkers are unaware of their right to a safe working environment,” said CCA Executive Director Juan Uranga. “That’s why it is important to provide farmworkers with the information they need to both protect themselves and also gain access to the agencies, like the Monterey County Agricultural Commissioner’s Office, that exist to protect them.”

A second member of the Farmworker Advisory Committee, Maria Elena Andrade, added: “It is important for our community to know that the Agricultural Commissioner’s Office exists to serve us, as well as the other parts of the agricultural industry. We are trying to create that message through the Farmworker Advisory Committee, even as we work with the Ag Commissioner and his staff to improve safety for farmworkers.”

Growers involved with the initiative include Sea Mist Farms, Tanimura & Antle, Bayview Farms, Scheid Vineyards and Costa Family Farms. Lauritzen recognized these leading growers for their, support, innovation and dedication in their effort to provide additional protections for farmworkers.

Lauritzen briefed officials at the state Department of Pesticide Regulation (DPR) on the pilot warning sign program and the information card campaign. DPR Director Brian Leahy praised the Monterey County initiative. “We all know that farmworkers are the most vulnerable population in terms of potential exposure to pesticides,” said Leahy. “When we protect farmworkers more effectively, we also enhance protection for the environment and the community at large. This initiative represents an important step forward for farmworker safety, and it underscores California’s leadership in environmental protection.”

The accord reached two years ago between the Office of the Monterey County Agricultural Commissioner, the agency that oversees pesticide regulations and other worker safety matters, and the Center for Community Advocacy (CCA), a farmworker advocacy group, established the Farmworker Advisory Committee for the Office of the Agricultural Commissioner of Monterey County—the first of its kind in the State Of California.