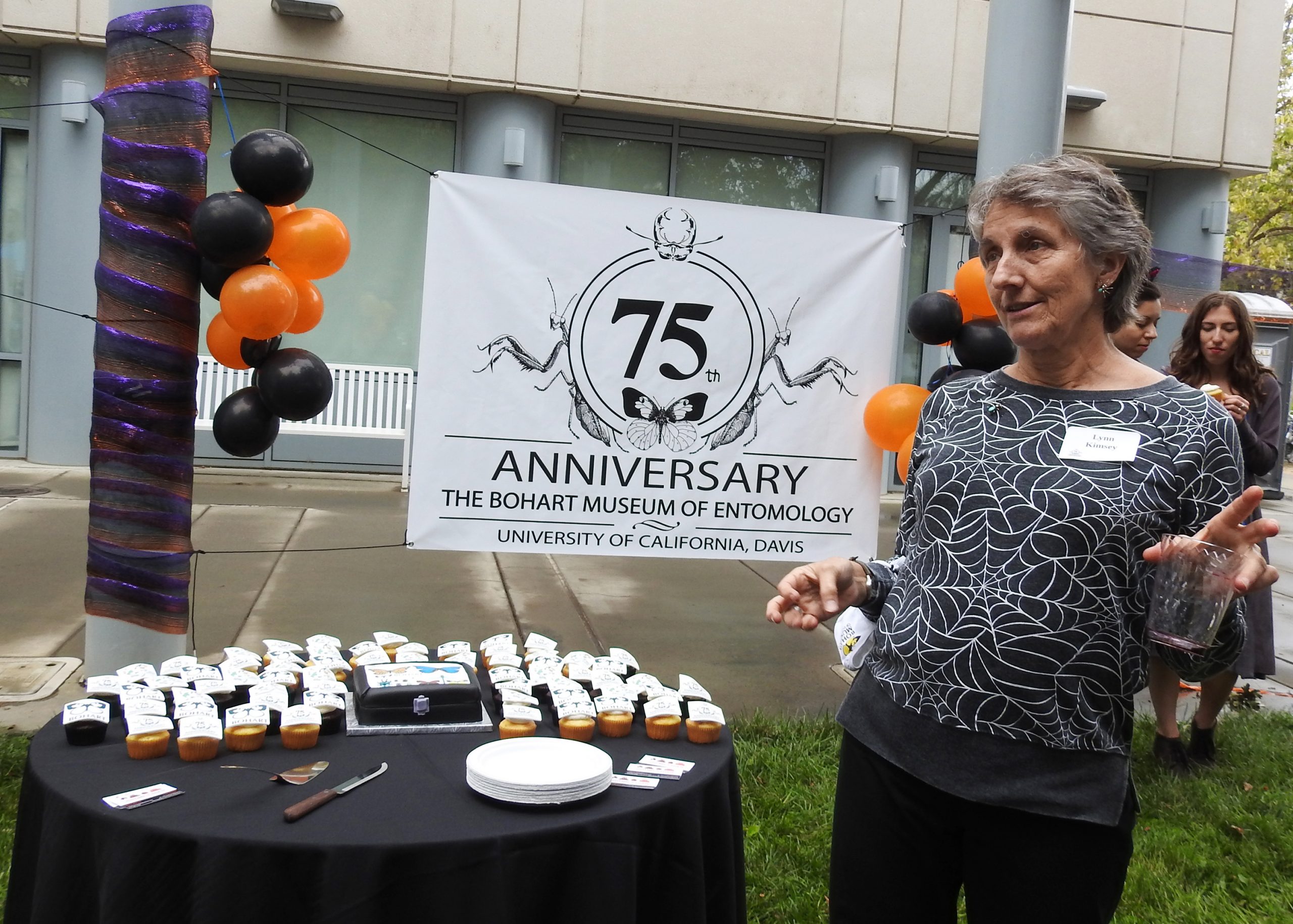 Photo: Lynn Kimsey, director of the Bohart Museum of Entomology and a UC Davis distinguished professor of entomology at UC Davis, addresses the crowd at its 75th anniversary celebration. (Photo by Kathy Keatley Garvey)

With spider decorations dangling from trees and entomologists representing everything from a horse fly to a tortoise beetle to a lamp, the UC Davis Bohart Museum of Entomology recently celebrated its 75th anniversary at an outdoor Halloween party hosted by the Bohart Museum Society.

Rain dampened the Crocker Lane event but not the enthusiasm as the crowd toasted the work of the Bohart Museum and its director Lynn Kimsey, UC Davis distinguished professor of entomology. She has administered the Bohart Museum since 1990.

The UC Davis museum traces its origins back in 1946 to two Schmitt boxes filled with insect specimens collected by noted entomologist Richard M. Bohart (1913-2007), UC Davis professor of entomology and museum founder. Named the Bohart Museum in 1982, it is now the home of nearly eight million insect specimens, collected worldwide.

“We should take a moment to not only express our appreciation of the Bohart Museum and the legacy that Dr. Richard Bohart left, but to all the work Lynn has done to make events like this possible and to continue the important work,” emcee Jason Bond, the Evert and Marion Schlinger Endowed Chair and professor, UC Davis Department of Entomology and Nematology, told the crowd.

Bond, who on Oct. 25 was named Associate Dean for Research and Outreach for Agricultural Sciences, UC Davis College of Agricultural and Environmental Sciences,  drew attention to the “remarkable planet that we live on and the diversity of animals and plants we share” and museum collections.

“Collections have a tremendous educational value,” Bond said, “and they also have amazing research value as well. Discoveries of new species don’t actually happen in the field, they happen in the museum collections. New species on the average spend about 25 years on the shelf before a graduate student, undergraduate student or a researcher pulls them off shelf and describes or discovers them.”

The specimens are an amazing resource, Bond told the crowd. “They not only record the diversity of insects in the past but sometimes we can use them as a key to solving problems associated with human diseases and agricultural pests and the like.”

He offered a toast to Kimsey, who in turn praised the thousands of collectors “who have their names” on the specimens. “We’ve been doing this for a long time. Eventually we’ll be able to serve the public again like we should. Otherwise it would just be a dead collection in a building somewhere.”

Kimsey, an alumnus of UC Davis, received her undergraduate degree in 1975 and doctorate in 1979. She joined the UC Davis faculty in 1989. A two-term president of the International Hymenopterists, and a recognized global authority on the systematics, biogeography and biology of the wasp families, Tiphiidae and Chrysididae, she won the 2020 C. W. Woodworth Award, the highest award given by the Pacific Branch of the Entomological Society of America, for “her 31 years of outstanding accomplishments in research, teaching, education, outreach and public service.”

A colorful 75th anniversary banner greeted the attendees. The work of entomologist Christine Melvin, who received her bachelor’s degree in entomology from UC Davis in 2017, it features a hover fly, sphecid wasp, snake fly, bumble bee, aphid, twisted wing parasite and a tardigrade (water bear). The Bohart Museum’s tardigrade collection includes some 25,000 slide-mounted specimens. A  2,112-pound tardigrade sculpture, crafted by artist Solomon Bassoff of Nevada County and considered the largest in the world,  graces the front of the Bohart Museum

Bond urged the crowd to help support the outreach mission of the museum. Bohart Museum scientists are seeking donations for their traveling insect specimen displays. They aim to raise $5000 by 11:59 p.m., Oct. 31 for their UC Davis CrowdFund project to purchase traveling display boxes for their specimens, which include bees, butterflies and beetles, Students will compile the boxes, which are  portable glass-topped display boxes that travel throughout Northern California to school classrooms, youth group meetings, festivals, events, museums, hospitals–and more–to help people learn about the exciting world of insect science.

“Now that UC Davis is open again to students we have all these bright, students on campus with fresh and diverse perspectives,” said Tabatha Yang, the Bohart Museum’s education and outreach coordinator. “We want to support their talent, so the funds we are raising will go to students for the creation of new traveling displays

The Bohart Museum, currently closed to the public due to COVID-19 precautions, is located in Room 1124 of the Academic Surge Building on Crocker Lane. In addition to its insect collection, which is the seventh largest in North America, the museum houses a live “petting zoo,” comprised of Madagascar hissing cockroaches, stick insects and tarantulas, and a gift shop (now online), stocked with insect-themed t-shirts, hoodies, jewelry, books, posters and other items. Further information is on the website at https://bohart.ucdavis.edu.