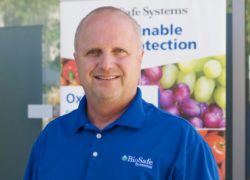 28
SHARES
ShareTweetSend to a friend

“The new strain, ANT-03, is different from commercially available strains is that it's more aggressive and more resilient, so it lasts longer in the environment. And it’s more pathogenic when it comes in contact with insects that you want to control," Sughroue said.

“You want to apply this prior to high population development. It's not a knockdown, so you want to be out there scouting fields. As soon as you start to see numbers that are indicative of causing damage, you want to start a spray program that contains BioCeres, and then after about 5 to 7 days, you'll start to see the pests decline in population."

The fungi spore germination is the key to the effectiveness.

“The spore lands onto an insect. It doesn't matter if it's an egg, a nymph, a larva or an adult. It starts to germinate, and through enzymatic activity and mechanical pressure, it grows inside the insect, and it will start to sporulate so the insects come down with a severe case of the flu. They stop feeding immediately.

Sughroue said while it takes about 3 to 5 days for the pest to die, it stops feeding very soon after the spore germinates inside them.

“We're going to expanding that list to include other important insects, but this is the first generation of this product,” he said.