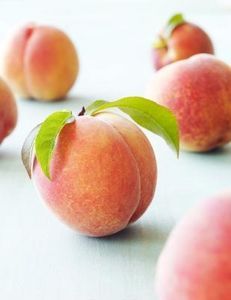 Not only are peaches a mere 38 calories (for a medium-sized fruit), they also boast measurable amounts of calcium, magnesium, phosphorous and vitamins C and K, plus a plethora of disease-fighting phytochemicals. A bonus: They taste great!

But don't limit yourself to eating whole peaches as a snack. This versatile fruit is perfect as a topping for cereal or granola, or mixed into savory foods like quesadillas (think peaches with brie ... YUM!), salads and salsas.

Yellow peaches are most familiar, but there are also white-fleshed varieties, as well as "donut" peaches, named for their halo-like profiles (they look like mini-donuts!).

No matter which variety you choose, there are a number of ways to play with your peaches. We asked Tara Mataraza Desmond, author of Almost Meatless -- Recipes That Are Better for Your Health And the Planet, for a few suggestions:

1.     Make a salad: Just slice fresh peaches (yellow or white) with smoked mozzarella (or Buffalo mozzarella) and arugula. The combination is sweet, savory and peppery will make you think you're eating something sinful, when in reality, it's deliciously healthful.

2.     Get creative with salsa: Cut peaches into one-quarter inch cubes, toss with fresh torn basil, minced jalapeno and minced red onion for a quick (and tasty) topping on grilled fish or inside fish tacos.

3.     Break out the grill: Slice peaches in half, remove the pit, then grill over medium-high heat until warmed through and marked with grill char (about 2 minutes). Serve with angel food cake or berry sorbet.

4.     Take to the oven: Roast quartered peaches with cumin and chile-dusted pork tenderloin. Serve with quinoa.

5.     Get saucy: Blend two fresh peaches with three fresh plum tomatoes, one clove of garlic, one small shallot, a splash of cider vinegar and one tablespoon of olive oil for a simple barbecue sauce or marinade.

And if that wasn't enough, here are a few fun facts about peaches: