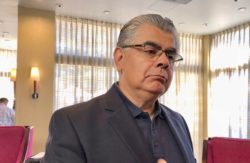 61
SHARES
ShareTweetSend to a friend

All Latinos Do Not Think Alike

The politics of the Hispanic farm employees in California is interesting. Many think there is a gulf between farmers and their Hispanic employees. Not so, said Arnold Torres, a journalist, consultant, and partner in the Sacramento-based public policy consulting firm Torres and Torres.

“You would think in the mind of the Latino Legislator, they believe that they are everything that these foreign workers need. That's the fallacy because the Latino urban member of the legislature deals with the farm worker as a stereotype,” Torres explained. “They don't sit there and have a conversation with them, and when they do, if any farm worker does not satisfy the image of a Cesar Chavez farm worker profile, then that worker is a sellout. That worker is on the grower side.”

This is all part of the fallacy of Latino solidarity.

“That's where I have to agree with the attitude and the disposition of certain Latinos in the valley. However, the problem is what other Latinos in the Central Valley are doing to consistently challenge that disconnect,” Torres said.

“Every Latino is not monolithic. We don't all think alike. So how does the grower and the farm worker community properly, effectively portray themselves to a population of elected representatives who happen to be Latino or happen to be white liberal or African American liberal or Asian liberal and say: 'Ladies and gentlemen, we are not supporters of the union argument just because we're farm workers?' ” Torres said.