Army Corps After Another Wheat Grower 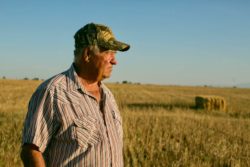 Army Corps After Another Wheat Grower

Another Northern California Wheat Grower is being sued by the U.S. Army Corps of Engineers

In February 2013, with no warning or opportunity to discuss the matter, U.S. Army Corp of Engineers sent farmer John Duarte a cease and desist letter to suspend farming operations, claiming that he had illegally filled wetlands on his wheat field by merely plowing it. Duarte spent millions to defend himself and to prevent the personal financial ruin with legal fees and fines

Tony Francois is an attorney for the Pacific Legal Foundation. He represented John Duarte, and he now is representing Jack LaPant. "Jack's being sued for growing a wheat crop on another portion of the same property the year before, in 2011, so it was a package deal for the Army here.
LaPant was already embroiled with the U.S. Army Corps of Engineers before Duarte.
“The Army's investigation extended over several years. So they knew about Jack's wheat crop in March of 2011,” said Francois. “They didn't take any action regarding him until December or so of 2012, at which point they decided that growing wheat was also a violation of the Clean Water Act.”

Mostly that's how they approached the Duarte case. They saw that he was not only a farmer, but he also operates a major Northern California nursery, Duarte Nursery, thinking he had plenty of money to pay the fine, but Duarte did settle for less than what they were trying to get from him. And Francois sees a significant problem here since the Army Corps of Engineers is the Army.

“I think it's important for people to recognize what we're talking about here---the United States Army is regulating how farmers grow food for America. I think we're accustomed to thinking of the Army Corps as not part of the military,” Francois said. “Of course, I served in the Army and knew a lot of excellent engineer officers who served in the Army Corps, and even some that served as the district engineers that oversee this work that goes on domestically," Francois said. They mostly oversee reservoirs, levees, and flood control, but this all does go on under the auspices of the Army.

“But what's gone on here is that that important traditional role that the Army has played has morphed, or you could call it mission creep, into a much more questionable, at a policy level, legal authority to regulate farming.”

“The problem is when you start thinking of soil, not dumped into a river, but soil that makes up a farm, and is moved and broken up and tilled when you plow and farm. The EPA and the Army Corps view that soil on a farm as a pollutant. And when you, in their view, move it a few feet or a few inches, from point A to point B, you've dredged it from point A, and you've filled point B, thereby polluting it,” Francois said.

However, in LaPant’s case, as it was in Durate’s case, we're talking about a low area of the field where there may be water, and it could be just from recent rain. "That's not the way the Clean Water Act is supposed to work. Recognizing that this would never work with farms, Congress in the 1970s, in one of their rare lucid moments, actually exempted farming from this whole regulatory authority that the Army has,” Francois noted.

“The Army has then added its conditions, so they deny Congress's exemption for farming, in all kinds of circumstances where, in their opinion, they think that exemption is unwarranted. So, in this case, the LaPant's property had not been tilled for several years before he grew his wheat crop, and the way the Army looks at it, if you don't keep tilling it, you lose the exemption,” he said.

The nature of farming, of course, is to use your expertise as a farmer to turn soil and water into a living thing. So there is no way that a farmer is going to effectively till the soil without, first of all, modifying that soil beneficially so that you'll be able to grow more crops in it, and B, one of the reasons you do that is to improve the way, whether it's rainfall, or irrigation water, or groundwater, to improve the way that your crop can access that water resource.

“This is how farming works, and we should leave farmers alone to do that,” noted Francois. “It's critically important for our entire society, and people forget this, the food surplus that we enjoy because of the ingenuity and hard work and industriousness of American farmers. This is the reason why all the rest of us who aren't farmers, have the luxury, maybe even, of pursuing other careers, of doing anything that we have the desire and the aptitude and the opportunity to do,” he said.

Francois also noted that all kinds of bad history have occurred in the last century when you get militaries involved in deciding where and how and when people can farm.

The case against farmer Jack LaPant is currently focused on depositions and discoveries being made before a possible trial. “We'll be filing an order called a summary judgment motion in about a month with the judge. That's where we try to identify whether there are legal questions that can resolve the case. And if that doesn't dispose of the case, then we'll be taking this to a jury in Sacramento to argue Jack's case.

Francois said he is quite optimistic in terms of helping LaPant. “I think that we've seen, particularly from the U.S. Supreme Court over the last couple of years, a renewed interest in holding agencies to the actual authority that Congress gives them. Instead of the prevailing judicial view of the last 50 to 60 years, which has been fairly deferential to agencies basically re-interpreting statutes to fit their policy preferences,” he said.

“We think when you read the Clean Water Act, what you see is a pretty clear, broad exemption for normal farming from this permitting. And we're optimistic that Jack and similar cases like this make their way through the courts, the courts are going to agree that the agencies can't add their conditions and take away what Congress meant, that be the fundamental protection for farming in this country,” he said.
The Pacific Legal Foundation, based in Sacramento, represents hundreds of Americans who seek to improve their lives but are hindered by the government. They sue the government when it violates American's constitutional rights and wins. The PLF's record of success at the U.S. Supreme Court is unmatched by any other organization of its kind, 12 victories, and counting.