American Lamb on the Rise 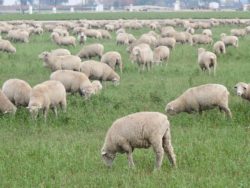 American Lamb on the Rise

American lamb is as popular as ever. California Ag Today recently spoke about lamb with Jim Percival, chair of the American Lamb Board, who is also a lamb producer in Ohio.

“It is part of our culture, and the majority of the folks that raised lamb in the U.S. are family operations, family farms,” Percival said.

Some of the farms are generational: three to five generations old. The American Lamb Board is working to build that domestic demand for lamb. They have seen an increase in the last couple of years.

“We are finding that millennials love American lamb, and that is one of the things that excites us,” Percival said.

“[There's] our Feed Your Adventure Side campaign; we have also worked really hard to make lamb more approachable, easy to serve, and easy to fix,” he explained.

Lamb is especially popular in California and other places on the West Coast.

“We still do that lamb jam every year in San Francisco, and that is still a huge event that a lot of people show up to,” Percival said.

After 16 years without open trade, Japan has recently opened back up for American lamb producers. Trade was closed after the BSE scare, and lamb was never able to be exported into Japan. As of two weeks ago, the first load of American lamb was shipped to Japan.

The demand there is very strong; the Japanese want that premium protein product.

“The chefs over there are asking for our product, and we see that as a real opportunity for growth for American lamb,” Percival said.

“Japan was one of our biggest trade partners before it was closed. I'm sure it is going to have a huge impact on the California producers, and the demand there is very strong, but as with anything else, our biggest thing is to make sure that more Americans are eating more American. Lamb,” Percival said.

The American Lamb Board, the U.S. Meat Export Federation, and ASI all worked together to open the market back up with Japan.