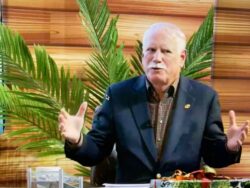 The recent virtual almond conference was a big success and people all over the world were watching and participating.

Richard Waycott is president and CEO of the almond board of California, with some details of the virtual conference.

“We have a few statistics. We had over 3,000 unique visitors and participants throughout the three days, we also had 149 exhibitors that partook in this year's conference, and more than 40 countries from around the world participated as well. So, I think a pretty robust experience or the Almond Conference 2020,” said Waycott.

Waycott said, it always seems to go by fast, whether it's a virtual or in- person conference.

“I know that usually when we're in an in-person conference environment, we usually have a gala dinner on the second night and all the remains of the conference is sort of a half day on Thursday on the third day,” Waycott said. “And I always remark how, wow, how did those two days go by so quickly? And we're almost over, you know?”

And it happened in the virtual conference as well. And Waycott is confident that we're going to be meeting in person next year.

“It’s December 7-9 2021, we are going to be in Sacramento at the Convention Center. I will be there, come vaccines, whatever it takes but we will be there. And we look forward seeing you there,” Waycott noted.