Almond Band Canker has No Cure 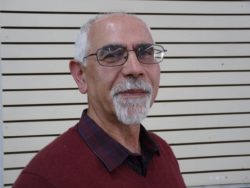 Almond Band Canker has No Cure

“This was a very old disease, and almost forgotten, but now we have major problems, particularly in the young orchards, first leaf, second leaf, third leaf, and it can also be found in six year old trees," Michailides said.

Band canker is a fungal disease caused by a group of Botryosphaeria fungi that are very common in major crops like grapes, almonds, pistachios, walnuts, avocados, citrus and other crops, so they have a large range.

Band canker establishes itself as a spore inoculum that resides outside and also inside of orchards and waits for the right conditions, which are wetness and also high temperatures.

“It develops first like a ring, a canker that is a horizontal canker on the trunks of the trees and decays the wood and produces sap. It's a disease that can kill young trees in the orchards,” Michailides said.

“Once we have the water and the temperatures rise above 50 degrees Fahrenheit, the conidia - the spores of this fungi - will germinate and infect vigorous varieties we have now through the growth cracks,” Michailides said.

“It's getting more serious, especially now, because we see that the disease is uniformly distributed throughout the orchard, which indicates to me perhaps that the inoculum is in the trees and not coming from the outside sources. We don't see the patterns we saw years ago, where we had the source and then a center of disease close to the source,” Michalides explained.