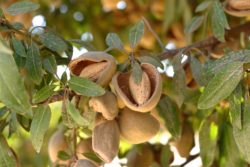 “We have a very different structure,” she said. “Almond Board's budget is based on a mandatory assessment. They cannot do use their dollars for advocacy or political involvement. And so the Almond Alliance was created to help fill that void.”

The Almond Alliance is a membership-based organization. One big issue that California almond growers are facing is water allocation. It is very important to understand federal and state in terms of oversight.

“Water is so complex, and right when you think you understand it, you realize that you don't,” Trevino said.

She thinks their congressional delegation has worked very hard to fight for the agriculture industry. They call it a water fix.

The water infrastructure in California was designed when the population was one-third of what it is today.

“Until some of those hard discussions of growth and development and storage happen, it's just going to be continual band-aids and fixes, and it definitely needs to be something much more,” Trevino said.

This is going to take some real leadership and a lot of people have been working very hard at this.

“I'm a big supporter of DeeDee D’Adamo, a member of the California State Water Resources Control Board, because she continues to fight for ag. She is very knowledgeable, especially when there is a water shortage,” Trevino said.

“Until we can start having some of those discussions about above ground water storage and general water use for the state of California, we're gonna just be putting band-aids on really big problems,” she explained.