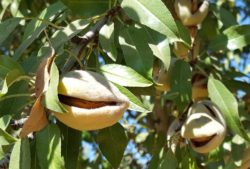 Since 2011, the Almond Achievement Award has honored an industry or allied-industry member who has added value to the California Almond industry through long-term service, contributions or innovations.

Nominations for the Almond Achievement Award are being accepted now. Winners must:

Almond Board of California’s (ABC’s) Industry Services Sub-Committee will evaluate the candidates and make a recommendation to the Board of Directors. The 2017 recipient will be selected by ABC’s Board of Directors and recognized during the gala dinner at The Almond Conference by ABC President and CEO Richard Waycott.

The names of the award winners are placed on the wall of the Nonpareil Conference Room at the Almond Board of California office.

Nominating an almond industry professional for the 2017 Almond Achievement Award is easy. Simply email Jenny Nicolau (jnicolau@almondboard.com) and state your nominee’s name and company, as well as your reasons for the nomination. Applications must be received on or before October 19 for consideration.