A Different Perspective on the Immigration Controversy 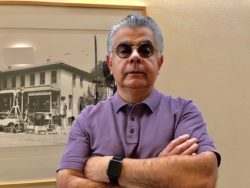 A Different Perspective on the Immigration Controversy

20
SHARES
ShareTweetSend to a friend

Mexico Has a Responsibility Regarding Immigration, Expert Says

With immigration becoming a hot-button issue within the political arena, those in agriculture have a deeper insight into this controversial topic. Arnoldo Torres, of the National Institute for Latino Policies out of Sacramento and partner with the public policy consulting firm Torres & Torres, has long been a leading voice for immigration within the ag sector—while realizing both countries (America and Mexico) need to do their part.

"Mexico has a responsibility to its people. The Central American countries have a responsibility. We've got to make sure that those countries are doing what they have to do to keep people from having to go elsewhere to make a living and to live," Torres explained.

He knows this from personal experience, when his grandfather made a move to America from Mexico, with no opportunity to go back.

"They realized that if they had gone back, there was never going to be a life for them back home," he said.

Torres further added that the desire for immigrant workers purely correlates with their unique work ethic.