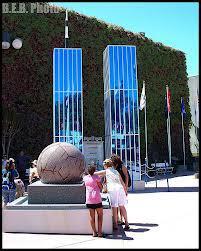 At 9:00 a.m., the Sacramento Young Marines will present colors at the Memorial, which is located inside the main gate near the Expo Center buildings. Admission and parking are free.

Central to the exhibit is a beautiful fountain including a granite ball inscribed with all of the names of the September 11 victims. There are also replicas of the World Trade Center buildings and memorials to American Airlines Flight 77–which crashed into the Pentagon–and United Airlines Flight 93, which crashed in a field in Pennsylvania.

Construction of the Cal Expo memorial began a year after the attack, when Cal Expo board member Larry Davis personally acquired and donated 125,000 pounds of wreckage from the World Trade Center. A massive I-beam extracted from Ground Zero was among the debris. Davis personally arranged for the wreckage to be shipped via rail to California. Through private donations to the California State Fair Memorial Plaza Foundation, the exhibit has been expanded to include additional elements.