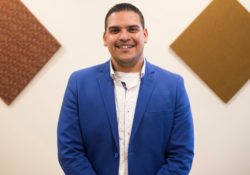 Jesse Rojas is the CEO of the Redd Group based in Bakersfield. “In essence, the Redd Group primarily offers labor management consulting, primarily in agriculture. But in general, what the group provides is everything from improving your employee relations by using and implementing new methods of communications.

Union avoidance is a big part of the Redd Group's work to helping companies and employees know their information, their rights under the NLRB and also the ALRB to avoid unionization. "However, at the same time, we want to improve human resources departments and management. We also offer training and leadership development for supervisors and middle management and upper management within companies," Rojas said.

"We also handle the aspect of properly enforcing arbitration agreements and those type of issues, and anything related to HR and labor relations and labor management," said Rojas. " I grew up in agriculture, and I love this industry. I love the people behind it, and that's where I've been focusing the most with the Redd Group, which is labor management in agriculture.”

UFW Still up To There Usual Business

“The UFW is still trying to unionize employees wherever they can. But, they're resorting to a different type of tactic in terms of organizing employees because they don't have much relevance or positive things to offer employee anything that would attract them to join the union," said Rojas.

“They're resorting to their friends at the ALRB, and the legal process, to push themselves on companies. In terms of the ALRB, we thought that they would change after the big corruption deal and violation of rights that they did at Gerawan. But it seems like the ALRB is just back to business as usual,” noted Rojas

The latest situation is that Governor Gavin Newsom recently appointment Barry Broad to an ALRB board position. Broad is an attorney by training, and he has spent most of his recent career as a union lobbyist in Sacramento, primarily with the Teamsters Union.

“He's a 100% pro-union big labor guy,” said Rojas. “My concern is he still doesn't have any experience in agriculture or labor relations with farm employees. So, based on what he's been doing in Sacramento, which is lobbying for big labor for unions, I can't see and expect any non-bias from him," explained Rojas.

Many do not expect that ALRB in California to change their tactics. The ALRB is expected to have farmers on the board so that there is a more balanced approach to decisions. “If they didn't want to have a farmer or someone who is in the interest of the agriculture industry. At least put an actual employee who's been in the farms, who understands what they need, what they want, their rights, their work, which is what this agency is supposed to do,” he said.

For more information on the Redd Group go to www.reddgroup.org