Assemblyman Frank Bigelow (R-O’Neals), Vice-Chair of the Assembly Appropriations Committee, shared with the California Water Alliance, “I am disappointed that SB1 was released off suspense file with amendments that make it much worse for farming and California as a whole.”

SB1 effectively declares that California would adhere to laws governing clean air, water, endangered species and labor that were in place in January 2017, before the beginning of the Trump Administration.

“SB 1 is bad for farmworkers, farmers, and communities throughout the state of California,” said William Bourdeau, Chairman of the California Water Alliance. “Our environmental laws and regulations should be defined by current, sound science, not petty politics.”

SB1 would freeze the existing federal biological opinions. Future permits would be subject to outdated science and ineffective federal baseline measures, thus permanently, constraining the coordinated operations of the Central Valley Project and the ç. 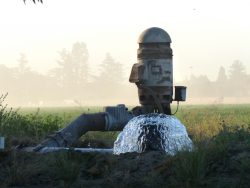 William Bourdeau: Surface Water Must Be Tied to SGMA

William Bourdeau is Vice President of Harris Farms, a Director of Westlands Water District, and Chairman of the Board of the California Water Alliance. Bourdeau recently talked to California Ag Today about the Sustainable Groundwater Management Act (SGMA), which will force growers in 2040 to keep the water levels in their wells in balance and not allow over-drafting.

“It’s mostly about living and growing up in the community and hearing about what the people did when I was still young,” Bourdeau said. “I understand that we were over-drafting the aquifer in the early days of agriculture on the west side of the valley and some very innovative, pioneering individuals figured out how to solve the problem. They built the Central Valley Project and delivered surface water. And if you look at the statistics, the problem was nearly solved. It’s only started to become a problem when the surface water deliveries have been cut off as a result of the biological opinions.”

“I can’t understand why that we can’t solve this problem. And I do think surface deliveries need to be tied into SGMA,” he said.

Bourdeau said he believes that the problem can be solved and not be detrimental to the environment.

“But any solution must consider humans and our needs … surface deliveries need to be incorporated into the plan,” Bourdeau added. “We need to use sound science, and it needs to be peer-reviewed.

“We need to make sure that we’re doing everything we can to preserve a domestic food supply capability. I think it’s in our national interest. … It’s a national security issue,” he said.

Bourdeau believes that we need to get away from looking at these very narrow issues and look at the big picture.

“We must find a way to do what’s best, and not all the decisions are going to be desirable, but I do think we can. We can make decisions that solve the problem and don’t take this wonderful resource out of production.

As a director for Westlands Water District, Bourdeau said no stones will be unturned for compliance to SGMA.

“We’re doing everything we can to try to make sure that we manage this situation to the best of our ability and our growers are represented in a way that they will succeed in the long term,” he said.

With California’s agricultural heartland entrenched in drought, almond farmers are letting orchards dry up and in some cases making the tough call to have their trees torn out of the ground, leaving behind empty fields.

In California’s Central Valley, Barry Baker is one of many who hired a crew that brought in large rumbling equipment to perform the grim task in a cloud of dust.

A tractor operator drove heavy steel shanks into the ground to loosen the roots and knock the trees over. Another operator, driving a brush loader equipped with a fork-like implement on the front, scooped up the trees and root balls and pushed them into a pile, where an excavator driver grabbed them up in clusters with a clawing grapple. The trees were fed into a grinder that spit wood chips into piles to be hauled away by the truckload and burned as fuel in a power plant.

Baker, 54, of Baker Farming Company, has decided to remove 20 percent of his trees before they have passed their prime. There’s simply not enough water to satisfy all 5,000 acres of almonds, he said. “Hopefully, I don’t have to pull out another 20 percent,” Baker said, adding that sooner or later neighboring farmers will come to the same conclusion. “They’re hoping for the best. I don’t think it’s going to come.”

There are no figures yet available to show an exact number of orchards being removed, but the economic stakes and risks facing growers are clear. Almonds and other nuts are among the most high-value crops in the Central Valley — the biggest producer of such crops in the country. In 2012, California’s almond crop had an annual value of $5 billion. This year farmers say the dry conditions are forcing them to make difficult decisions.

The thirst for water has sparked political battles in Washington, D.C., over use of the state’s rivers and reservoirs. This month President Barack Obama visited the Central Valley, announcing millions of dollars in relief aid that in part will help the state’s ranchers and farmers better conserve and manage water.

Baker, who favors farming over politics, explained the math leading to his decision. Between now and the summer almond harvest, he would need to irrigate his orchards with scarce, expensive water and pay to have the trees pruned and sprayed. Bringing in beehives to pollinate the blossoms costs nearly $500 an acre.

That all would amount to a $2.5 million gamble, without knowing if the next couple of months will bring significant rain to the valley floor and snow to the mountains. “You’d have wrapped a lot of money up in those trees to see what happens,” he said.

Removing old trees is common practice. Almond trees remain productive for about 25 years, growers said. The state’s almond farmers removed over 10,000 acres of trees in 2012, according to a report by the California Department of Food and Agriculture. Most were past their prime. No figures are available on how many orchards farmers are removing today, said department spokesman Steve Lyle.

But Alan Thompson of G&F Agri Service LLC, who leads the crew ripping out Baker’s orchards, said the drought spiked his business by 75 percent. This time of year is typically slow, but Thompson, 31, said his heavy equipment operators start at dawn each day and work until sundown, removing orchards in short order.

“We don’t even mess around with cutting them up with chain saws,” he said. “That grinder is the way to do it right there.”

Ryan Jacobsen, executive director of the Fresno County Farm Bureau, said he expects that almond growers will be removing trees through the spring and summer because of the drought. “I have no doubt permanent crops will be taken out because of this,” he added.

Tim Lynch of Agra Marketing Group said power plants in the state nearly have more wood chips from almond trees than they can handle. Lynch’s firm acts as the middle-man between growers getting rid of their trees and the power plants that need bio fuel to burn. The dry weather this winter has allowed growers to work in their orchards that are typically soggy, and the drought pushed them to take out trees earlier than normal, he said.

The high value of almonds has caught the eye of investors in recent years, who paid top-dollar for land to plant almond orchards and cash in on the bonanza. Their value remains strong, making the decision for farmers to remove orchards difficult.

William Bourdeau, executive vice president of Harris Farms in Coalinga, said he and his colleagues within the next 30 days will have to confront the hard decision about scaling back their almond orchards. They’ve already decided not to plant 9,000 acres of vegetables — including 3,000 acres of lettuce that would have produced 72 million heads and generated 700,000 hours of work.

Next, they may rip out 1,000 acres of almonds, a permanent crop, Bourdeau said.

“I hesitate to use a number that big. Unfortunately, it’s going to that big, or bigger,” he said, still holding out hope the season will turn wet. “We’re trying to limp along as long as we can.”

“Leaving the orchards un-watered and expecting they’ll somehow survive the drought is no option,” Bourdeau said, “because insects infest the dying trees and multiply, spreading to other orchards.”

“Drawing well water is a bad option,” he said. Their wells sink 2,400 feet below ground in his region of the Central Valley, providing water that’s unhealthy and compromises the crops for years, if the trees survive at all, he said.

They have considered blending well and surface water to minimize the harm. Or they can remove some almonds to direct their limited water to fewer orchards.