Established by the Fresno County Board of Supervisors for this week, Monday July 25 through Sunday, July 31,“California Cantaloupe Week,” recognizes Fresno County as the lead canteloupe-producing county in California, which currently produces 75% of all cantaloupes sold in the United States.

Steve Patricio, president and CEO of Westside Produce, a grower, packer and shipper in Firebaugh said, “The quality has been absolutely outstanding this year, with some of the highest sugar results we’ve seen in recent years.” Patricio has also observed great demand in the marketplace as well.  At this point, it’s time to eat those beautiful California cantaloupes,” he noted.

Packed with nutrition, “Cantaloupes are one of the most outstanding things we can eat for our health,” Patricio affirmed. “That daily dose of cantaloupe can do wonders for a healthy lifestyle.”

The California Cantaloupe industry has been on the forefront of the food safety movement throughout the world, “You can be assured that every cantaloupe grown, packed and shipped from California meets the highest standard of food safety anywhere in the world,” Patricio stated.

The California Cantaloupe Advisory Board (CCAB) requires all California cantaloupe growers, packing operations, and cooling facilities undergo mandatory announced and unannounced government food safety audits. The audits are based on a set of food safety standards developed from 20 years of university research along with input from government, food safety and farming experts. CCAB food safety systems allow for science-based standards to be updated as new information or science becomes available.

You can review all of the safety checkpoints here.

It was a vision by Steve Malanca a tractor, salesman, and Erik Wilson, pest control operator and honeydew melon farmer, both working in around Dos Palos in Merced County.

“The fact that California agriculture is only 2 percent of the gross domestic product of the state was offensive to agriculture,” said Wilson. “because we all know it goes way beyond the gross receipts.”

Back in 2013 Malanca, an equipment salesman with Duetz Allis in Kerman, Calif., came up with a decal with the message: My Job Depends on Ag. He made a few for his friends who slapped them on their trucks.

“The phrase was inspired by a video done by Mike Wade, California Farm Water Coalition, in which he asked several people how they depended on ag for their job,” Malanca said.

Malanca was born and raised in Firebaugh, where his grandfather settled after emigrating from Italy. “My grandfather worked for Miller and Lux ranch, which was one of the largest ranches in the United States in the late 1800s,” he said.

“My father was born and raised on the West Side and was a cotton gin manager for Producers Cotton Oil Company. I have an older brother who is in the cantaloupe business longer than I have been in the farm equipment business. He is part owner of Westside Produce, and my younger brother is a shipping clerk there.

For the last 40 years, starting in Firebaugh, Malanca has been selling farm equipment. “That community has been tremendous to our family. Being involved in the equipment business, and talking to our customers about the trials and tribulations about water was an inspiration to put the ‘I Depend on Ag’ video together.

“There was a local Firebaugh farmer who made a brown ‘V’ decal that was a spinoff of the green ‘V’ of former Fresno State Bulldog coach Pat Hill, signifying the green valley. The brown V of course signified no water,” said Melena. “I expanded the idea and generated the ‘I Depend on Ag Decal’ about a month ago.

“Then Erik immediately suggested that we put it on Facebook, and the two ideas were married–and here we are,” said Malanca. As of the afternoon of June 6, the number of connections were close to 21,000 members!

“We did not want to have a Facebook with statistics on the importance of agriculture in California,” said Wilson. “I have a friend named Brian Ervin who is on Facebook, and he posted an item unrelated to the ‘I Depend on Ag’ concept. He wanted to know about other people’s California…Was it raining?…Was there hail on the ground? There was also an image of a guy loading a hay truck.”

“Instead of pushing out information, I got the idea of just letting everyone tell their own story,” Wilson said. “If people have a job that depends on ag, then we should let them tell their own story. Let people get involved. They own the page, and the stories have been wonderful. In fact, Steve and I have gotten choked up on some. People are saying are some things you’ve never heard of, and it’s really kind of historical,” he said.

“There are a lot of old methods of farming that have been forgotten that are now being introduced on the page,” said Wilson.

“Also, I have encouraged any group or person who disagrees with our philosophy and farming methods to open up the conversation, and not yell or get profane. This is what everyone America has been crying for from our politicians. So, we are going around them. This is how civilized adults get things done.”

“There have been comments from the organic crowd regarding images of sprayers working in fields. Now if they want organic food to eat, we will be happy to give it to them at a higher cost; organic production costs us more in time, money and trips across the field because the materials that we are permitted to use are not as affective,” said Wilson.

“We had a conversation with Western Growers on June 4 in which they asked if we were having to delete a lot of entries from people bashing the web page,” said Malanca. “And Erik, who moderates the page, said only three posts had to be deleted.”

“I may have deleted something prematurely because I thought a comment might go south too fast, but I just do not want the nastiness or personal attacks to take over, because it often happens if you do not moderate–even if it’s a friend–if they throw F-bombs, their entries will be deleted.”

“We are hearing from so many people who understand that ag is part of their job. We had a guy who works in the tortilla chip factory in Los Angeles who depends on ag for his job because all the corn that goes into the chips is grown in the San Joaquin Valley,” said Wilson.

“Flower shops are connecting in because flowers are agriculture. A lavender grower also posted a comment.”

Trucking companies are chiming as well. “If we can’t grow and sell it, then these boys can’t haul it,” noted Wilson. “And if we can get the trucking industry behind us since they do haul a lot of ag products, suddenly we are uniting an even larger segment of people who depend on agriculture,” said Malanca.

“I’d like to see these truckers and the guys on the docks get as passionate as we are, and maybe decide not to haul freight to areas that are complaining about farmers. They need to say, ‘if you want what we have, then turn the water on for the farmers.'”

“This is giving farmers a voice,” said Malanca. “And it’s something that has been missing.”

“Our wives have said that we are preaching to the choir, and I say that we need to rally and embolden every single person in the industry. I want to champion them as their story has not been told in the media–other than the agricultural media,” said Wilson.

“Many fragments have beentrying to get something done, but now we are seeing farmers really coming together on ‘I Depend on Ag.’ This is what we have been trying to do since the beginning of time,” said Malanca.

While the scope of the facebook page focuses on California, plans are germinating to roll out a national campaign. “After all, there are millions across the country who depend on agriculture,” said Wilson. 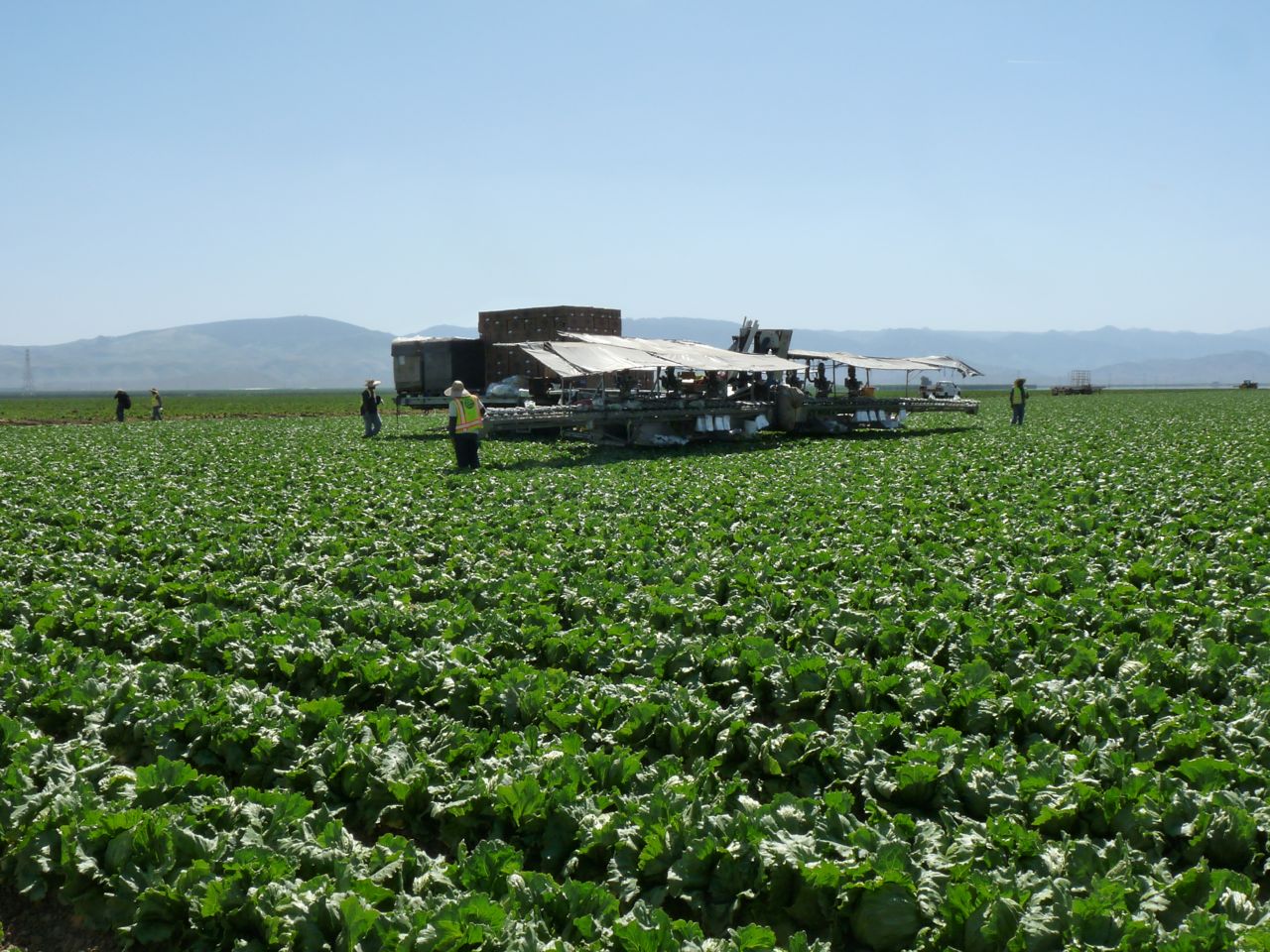 Stephen Patricio, President and CEO of Westside Produce, a grower, packer and shipper of cantaloupe for California and Arizona, talks about food safety of our locally grown foods.

“The Center for Produce Safety is a 7 year-old organization that facilitates science-based actionable research to improve the quality as well as the safety of the healthy fruits, vegetables and tree nuts we are so proud of,” said Patricio.

Patricio commented that in general, growers have a great understanding of food safety. “There’s been a tremendous awareness over the years I’ve been actively involved, and we’re maturing everyday. Realistically, the industry matures, the workers mature, because the elements of food safety don’t exist in an ivory tower or in an office, or in a tractor or in a shop; they exist everywhere on the farm,” said Patricio.

“From the absolute beginnings on the dirt all the way through the packing houses to the shipping docks to the sales offices; it’s a culture. Food Safety is a culture, not just an action,” he added.

And for those consumers worried about the nutrition and safety of their produce, Patricio reassures that everyone involved in produce cares just as much as they do. “What I continue to tell people is that there is not a farmer, producer, or grower anywhere who doesn’t eat the product that they produced themselves. And, they feed it to their family, their children, their grandchildren. And they’re proud of it, they’re happy with it.”

Patricio continued, “If that’s the approach that people simply take to their daily actions and activities, well, I don’t have to worry about the safety of food. We just have to use our heads and manage temperature and everything from spoilage to cross-contamination that can happen anywhere. But you do a good job of creating a safe product,” said Patricio.

The beauty of California produce, according to Patricio is that it is “not a sterile environment. Everything isn’t produced in a factory, taken off a shelf, or torn out of a plastic container. It’s all healthy and from nature. It’s in God’s container and we just have to do our job of not contaminating it.”