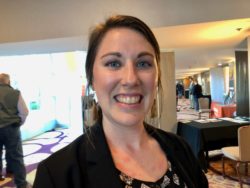 Contrary to its name, weedy rice is not in fact weeds in rice—but it is presenting several challenges to California rice growers. To help farmers combat the pesky variety, UC Davis Ph.D. student Liberty Galvin and the horticulture and agronomy graduate group have conducted extensive research.

According to Galvin, the genetic and physiological properties of weedy rice are the same as the cultivated varieties consumers typically eat. So what’s the issue? Galvin said that besides the fact that weedy rice is off in its coloring, it’s nearly impossible to harvest.

“The issue is that the seed shatters, or basically falls to the ground. So when you go through and try to harvest it, the grain does not get collected in the harvester,” Galvin explained.

Although right now it seems that commercially growing weedy rice is not an option, there are ways to prevent it. Galvin’s research found that drilling the seeds at least two inches into the soil will eliminate seed germination or emergence in the field. This is especially useful in California, where tillage is done only to prepare the field, not plant the rice itself.

Galvin said that while growers can produce their own rice seed, it has to be certified by the California Crop Improvement Association or a Rice Seed Quality Assurance Program.  In all cases, growers are required to plant only certified rice seed so there is no opportunity for traces of weedy rice to enter the soil.

“That is why tillage depth is so important, because that’s how you reduce your seed bank,” she said.

In Northern California, rice growers typically prepare to start harvesting in mid-September, but some growers have endured a lot of weed pressure from weedy rice (Oryza), also known as red rice, according to Whitney Brim-DeForest, a UC Cooperative Extension Rice Farm Advisor in Sutter, Yuba, Placer, and Sacramento Counties who focuses particularly on weeds. Red rice is actually the same species as cultivated rice, but it produces far fewer grains per plant and is therefore considered a pest.

Brim-DeForest said weedy rice is common in the Southeast, but not in California. “We’ve been pretty lucky in California in that we actually don’t have a big problem with it,” she said. “It’s a big problem down in the southern U.S. and they have been dealing with it in for a long time; but we have had it crop up. I think the last time was in 2006, and we managed to deal with it. It somehow popped up again in the last couple of years, so we’re dealing with it again.”

How weedy rice reached California is apparently a mystery. “We don’t really know the source of it, to be honest,” said Brim-DeForest. “We’re investigating that through research, hopefully starting this fall,” she said.

Brim-DeForest said growers have few choices to control weedy rice. “Growers that have it will either have to rogue¹ it out, pull it out by hand or sacrifice that field and spray it with Roundup,” she said, “which would kill the rice as well. And, if the rice grower doesn’t know he has weedy rice in the field, it could hurt him later at the rice mill,” explained Brim-DeForest.

“Once harvested, the rice goes to the mill. If a certain amount of red rice bran (the outer layer surrounding the rice grain) is discovered, the mill will not accept it and could reject the entire load,” she said.