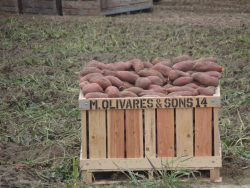 California sweet potatoes are in full harvest, and our potatoes are one of a kind, said Scott Stoddard a UCANR Cooperative Extension farm advisor for vegetable crops in Merced County. The difference is the sheen.

“Sometimes they come up clean out of the ground because we’ve grown them in a very loose sand, so the sand just falls off of them, and it almost leaves some shine,” he said.

You can get what is called the California Sheen.

In a lot of other areas of the country, there is a little bit of mud and a little bit of silt. The crop they’re digging up is growing in the ground and kind of looks like it needs to be washed.

“A lot of times with California sweet potatoes, they don’t even look like they need to be washed when they come up out of the ground. It looks like they can just go straight from the field to fork,” Stoddard said.

“Not like a cactus where they can survive on no water, but we can get by in about two and a half acre feet. That’ll give you a good 100 percent potential yield,” Stoddard explained. 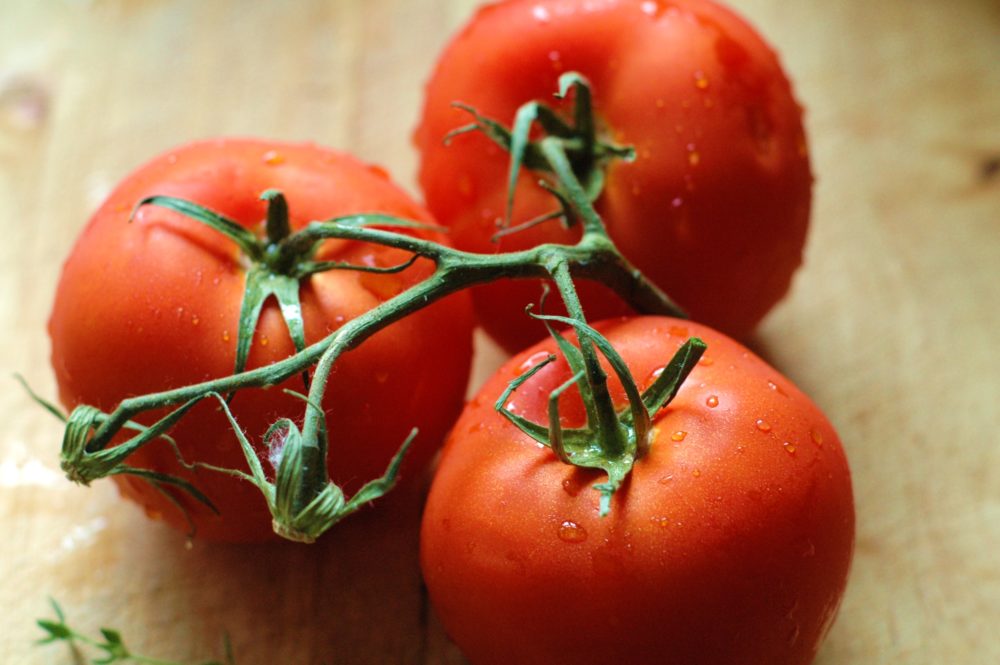 “We had some concerns early in the season that we might be looking at a year where it’ll become a challenge, because we were finding it in lettuce back in February and March in the Huron area,” Turini said. “And then we notice that tomatoes were showing the virus symptoms. We had been managing tomato spotted wilt in processing and fresh market tomatoes largely with a resistance gene, and it seemed that the resistance was breaking.”

“We were also talking about an IPM program, but the industry was leaning on this gene. This gene became a big part of their spotted wilt prevention program,” Turini said. “While sanitation of weeds was practiced, and there was some thrips management, it was really dependent upon this single gene resistance in the tomatoes, and as of 2016, we saw evidence that that gene was no longer performing.” 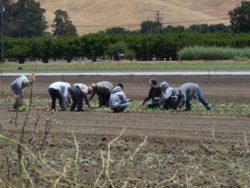 Gaskell also works with specialty crops that are lower in volume but are high value crops.

“I don’t ask small farmers what their gross sales is by any means, but because of the emphasis on these specialized niche crops, I tend to see more small scale farming operations,” Gaskell said.

Blueberries are a perfect example of a specialty crop in California. With a large, diverse population, this pushes the growers to continue producing high-quality fresh crops.

Blueberries were originally grown in the eastern United States because they like the acidic soil. Of course California growers found a way to amend the soil to drop the pH. 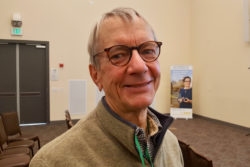 Marketing Makes it or Breaks it

Mark Gaskell is with the University of California cooperative extension as a small farm and Specialty Crop Advisor for San Luis Obispo County. Gaskell recently told California Ag Today about his work with growers and small farms in the county since 1995.

“Part of my job has to do with applied research and educational programs, and this case related to keeping small farms viable and successful,” Gaskell said. “These activities include troubleshooting problems, helping growers develop new crops and develop new market opportunities that make them more competitive.”

The big question is, what to plant and how to profit from the crops?

“I often tell growers, plan on spending half or more of your time on marketing because marketing is probably more important than growing,” he said. “Marketing is what will draw crowds. It is best to have a marketing plan for your crop before putting your seeds in the ground.”

“Some opportunities are direct sales via farmers markets or farm stand, but more often than not, those market outlets are full and there is a long waiting list,” Gaskell explained.

Growers have to then look at selling through specialized wholesalers and in some of the metropolitan areas, Gaskell said. 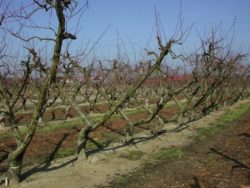 Pedestrian Orchards in the Making

California Ag Today recently spoke with Becky Phene with the University of California out of the Kearney ag center. She’s working alongside Kevin Day, UC tree fruit advisor in Tulare County, on development of pedestrian orchards.

“My background is irrigation. I got asked to participate in the pedestrian orchard with Kevin because he wanted to demonstrate multiple technologies that would be beneficial not just now, but in the future,” Phene said.

Overwintering NOW Population Must Be Reduced

The following is a special report by Robert H. Beede, UCCE Farm Advisor, Emeritus, on the state of the pistachio harvest and the fight against navel orangeworm damage.

Season Wrap Up: It looks like we wound up with about 600 million pounds. Only God knows how many million navel orangeworm got, but you all know it was a bunch! Processors have their hands full delivering the quality nut California is known for. Many growers I speak to ask, “What happened?” From my discussions with many crop consultants, what DIDN’T happen was sanitation! This was not only true for the pistachio growers, but almond producers as well.

Growers barked at me about the wet weather making orchard access difficult to impossible, the size of the trees making sanitation cost prohibitive, and the difficulty in getting the nuts out of the trees. These issues are all true. So, if you decide that you cannot sanitize, then you had best figure out how you are going to run the ranch on pistachios that are 30 to 40 cents less valuable than those with low worm damage.

I know I sound like the donkey’s behind with all the answers, but the pistachio industry needs to join forces with the almond guys to determine what we can collectively do to reduce the overwintering NOW population.

There has been millions spent studying NOW, and I have NEVER waivered on the fact that sanitation is the cornerstone to controlling this beast! I also still think that once we get the kinks out of mating disruption, that everyone should use it as a means to SUPPRESS the population. Note that I did NOT say, “Control it as a stand-alone program,” just in case someone out there wants to stuff words in my pie hole!

We are in DESPERATE need of an effective adult monitoring tool for NOW mating disruption. I hope this comes soon, in order to give pest managers a method of knowing when the pheromone is not reducing mating sufficiently. We also need more research on the cultural and environmental factors affecting the number of early split nuts, which become the NOW link to the new crop at harvest.

Sanitation: Now is the time to begin winter sanitation by removing the nuts that did not come off during harvest. Many of these nuts are blank, but do not assume that all of them are. Research by many good scientists has proven that winter sanitation is the key to breaking the overwintering NOW population cycle, which looms ever greater when the winter is warm and dry. Beginning the season with a large overwintering population simply reduces the effectiveness of your in-season sprays. Although the research has not been done, to my knowledge, the TIMING of sanitation may be a factor in its efficacy.

Nut removal and destruction early in the fall may be more effective, because the percentage of NOW larva in the early instar stages should be greater. This is due to the large peak in egg laying that occurs during hull degradation. Thus, they may be more susceptible to desiccation or fungal attack because of their smaller size. Disturbing their overwintering site from the tree onto the ground early also places more environmental pressure on their survival. This is just my opinion; it may be worthy of investigation. 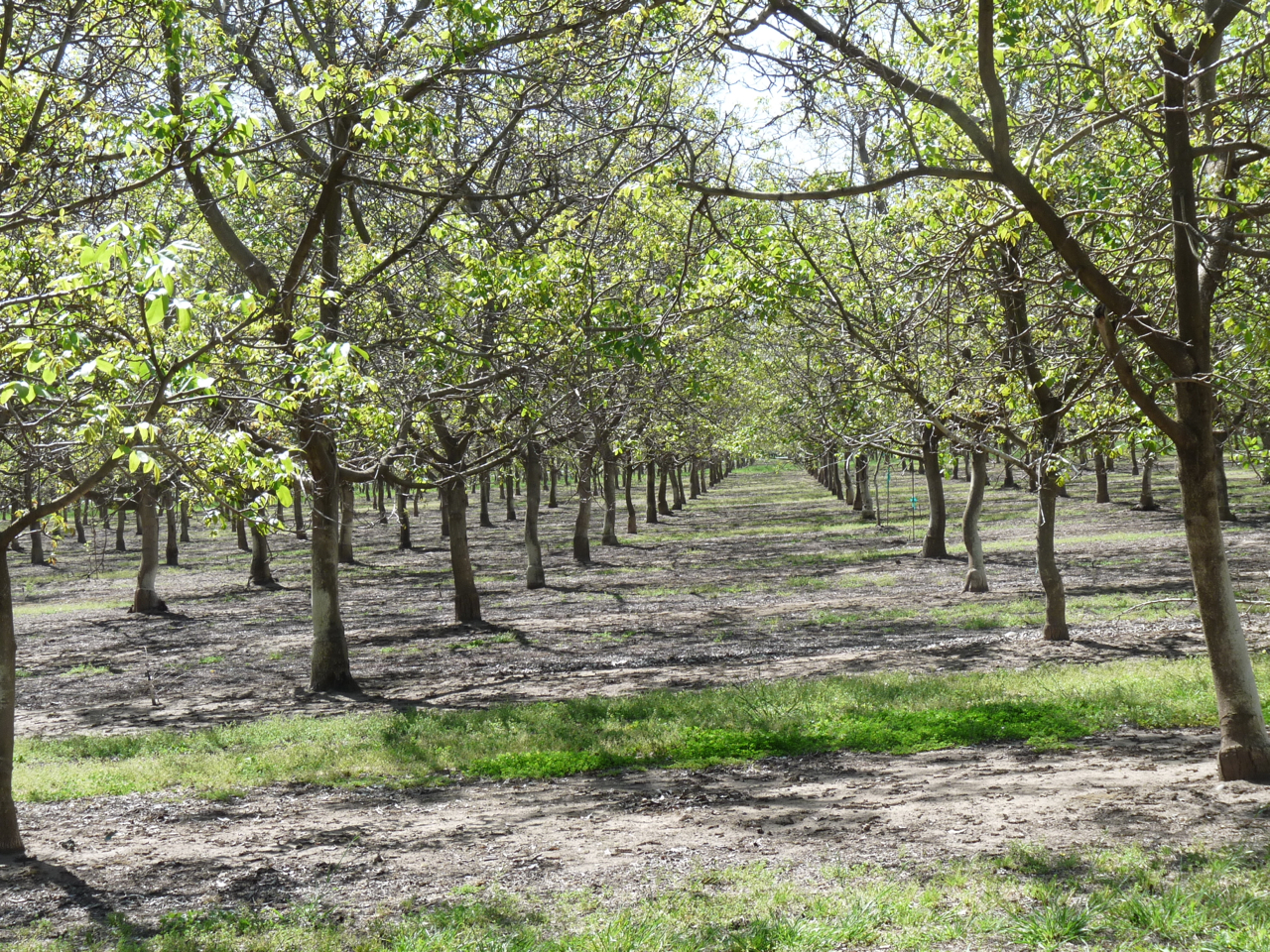 Some Walnut Trees in Northern California Suffering from Lack of Sleep!

We all know what the day after a night of insomnia is like; befuddled, confused and tiring. Sometimes we cannot even get our act together. The walnut trees of Northern California are experiencing just that.

Richard Buchner, a UC Cooperative Extension Farm Advisor in Tehama County, explained, “Tehama has a lot of Chandler varieties and the trees are sort of behaving like they did not get too much sleep, in the case of the tree it is more like chilling, and we think that the lack of chilling is confusing them. We have trees with full leaves out, and trees that might have some flowers out, or maybe the right-hand part of the tree, is flowering and the left side is not or it’s flowering. They are really confused.”

Commenting on the potential crop, Buchner said, “We had a lack of chilling last last year, but had a pretty good crop, so we are not wholly sure what this means. It looks funny, but it is getting a little better as the trees grow older.”

“Walnuts need a pollinator to set the crop, but that cannot happen if the blooms have not opened,” noted Buchner. “The problem is if the bloom straggles way out, and we don’t get flowers pollinated, we can’t set a nut and sometimes we get lots of mixed nut sizes,” he said.