And, of course, more water in the system probably helped, as it did in Fresno County, which announced $7.028 billion in its 2017 Crop Report, released earlier this month.

The dairy industry, which is prominent in Tulare County, came in number one again, representing 25 percent of the total value.

“Milk prices were stronger in early 2017, but they went down later in the year. And they continue to go down, but still it was a big part of the Tulare County ag receipts in 2017,” Wright said.

Navel and Valencia oranges were next. Cattle and calves ranked fourth, down from category number three in 2016, because cattle prices were off last year.

Wright said the value of this year’s crop report, $7.39 billion, is the third highest value Tulare County has ever reported.

The 2014 crop report from Tulare County indicates another record-setting year. Marilyn Kinoshita, Tulare County Ag Commissioner, noted how well the dairy industry did, “30% of our overall value was actually milk, so dairy is incredibly important to our county. They had some good prices for most of the year. That is what brought up the value of milk to $2.5 billion. It is a significant increase over the prior year. A little bit more yield, but it is the price that kicked up well over two billion dollars.”

Citrus sales also played an important role in setting the new sales record, she said, “They had a really good year and went up considerably. So there is our number three crop. We are the nation’s number one citrus county. When our growers are having a good year, it benefits the county. We have 71 citrus packing sheds in our county and all the major juicing plants in California are right here.”

Kinoshita also mentioned some of the ways that citrus has become the number three crop, “It is sort of supply and demand, and great marketing. We ship to 90 different countries around the world. A portion of our production is exported.”

In 2014, livestock in general was up 40%, which also made an impact on sales in Tulare County, “You’ll find when you go to a grocery store that steaks, chicken, and turkey all cost more. So all of our species had an increase in price per unit for this crop reporting year.” 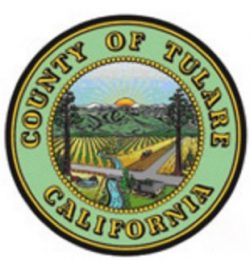 Tulare County’s total gross production value for 2012 is $6.22 billion. The report, released today, showed an increase of  $581 million, or 10 percent above the 2011 value of $5.6 billion.
Dairy products continue to be the leading agricultural commodity in the County, with a total gross value of $1.8 billion, a decrease of 12 percent.
“Milk represents 29 percent of the total crop and livestock value for 2012,” said Marilyn Kinoshita, Tulare County Agricultural Commissioner. “Total milk production in Tulare County remained relatively stable,” she said.

Possibly, if milk prices were a little higher during the year, Tulare County would have beat Fresno County for the first time!
“Livestock and Poultry’s gross value of $661 million represents an increase of 5.8 percent above 2011, mostly due to an increase in value for turkeys, cattle and calves,” noted Kinoshita.
Fruit and nut commodities were valued at $2.8 billion representing an increase of 29 percent. “The majority of this gain was the result of an excellent year for our grape category,” Kinoshita noted.
The total value of all field crops was $776 million, an increase of 24 percent from 2011. “Local demand for dairy feed continues to keep high values for our field crops. Nursery products were valued at $67 million, representing an increase of 2.5 percent over last year. “This minor increase is a reflection of the continued uncertainties in both the housing and agricultural markets,” Kinoshita explained.
Vegetable crops were valued at $20 million in 2012, representing a less than one percent increase.
“The 2012 report covers more than 120 different commodities, 43 of which have a gross value in excess of $1 million. Although individual commodities may experience difficulties from year to year, Tulare County continues to produce high-quality crops that provide food and fiber to more than 84 countries throughout the world,” said Kinoshita.
Kinoshita expressed appreciation to her staff, particularly Lea Pereira, Jacqui Balderas, and Dennis Haines for their contributions to the report.