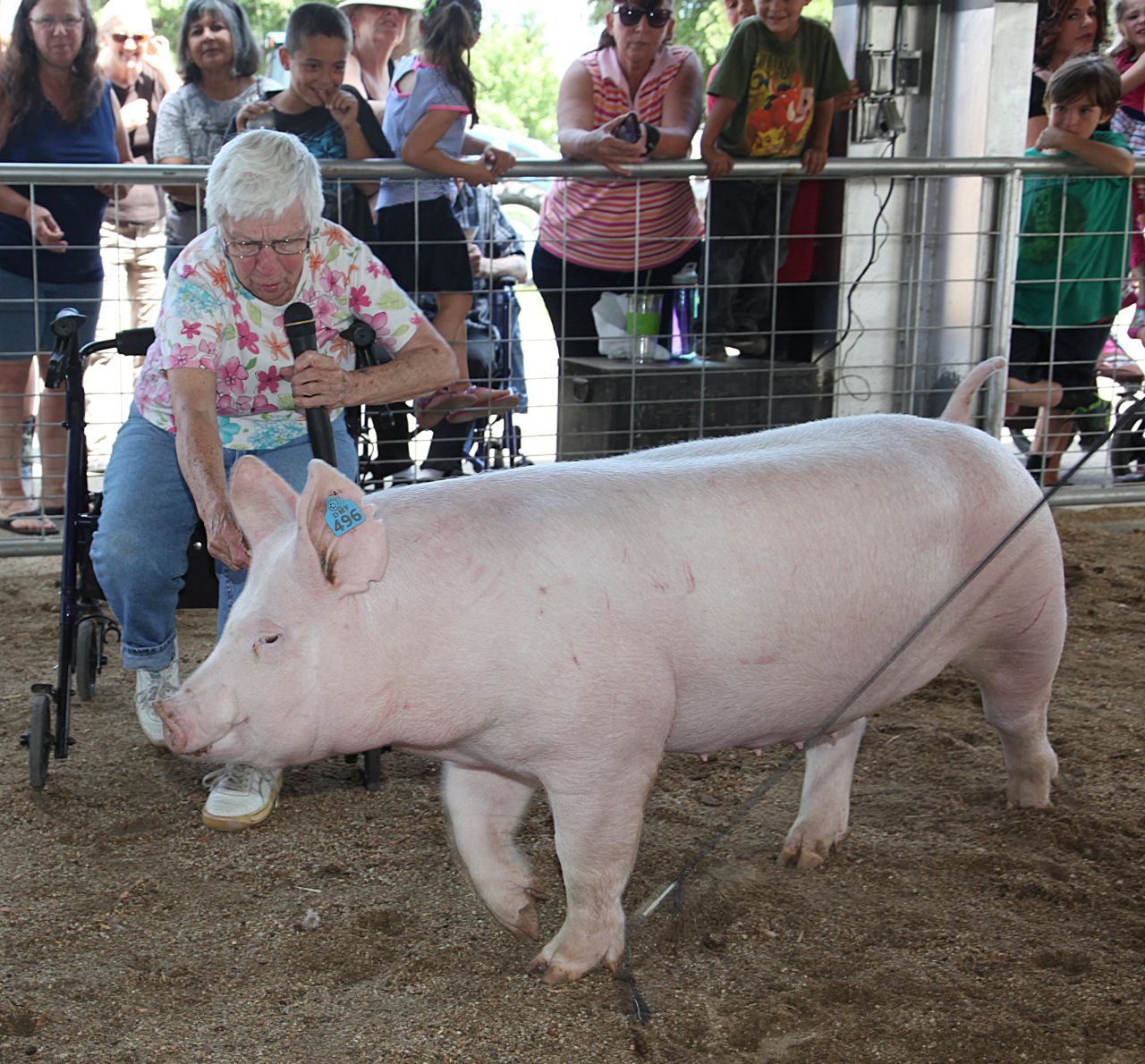 Lang coaxed a hog over to her wheelchair with a firm and determined voice. The hog readily obeyed.

“My dad used to raise Hampshire pigs,” she said. “And now my great-grandchildren do.”

Lang, who has been attending the Dixon May for more than 50 years, this year decided to enter the 12th annual hogcalling contest. Three of her great-grandchildren did, too: Christopher Lang, 9, his brother, Gabriel Lang, 3, and their cousin, Xavier Copeland, 11.  Christopher and Xavier, both members of the Suisun Valley 4-H Club, raised hogs for the fair. All three boys won awards in the hogcalling contest.

Emcee Donnie Huffman, president of the Friends of the Dixon May Fair and a former 4-H swine leader, urged the contestants to “bring home the bacon” and to get the hogs “hamward bound” and into “four-squeal drive.”

The judges scored the contestants on originality, creativity, audience appeal and hog response. The judges were Hendrick Crowell of Fairfield and Mary Harris of Vacaville, past presidents of the Dixon May Fair Board of Directors (Harris is also a current director); “Boss Hog” Nick Stacey of Dixon, the longest reigning hogcalling champion–eight years; and JoAnn Giannoni of Dixon, secretary of the Friends of the Dixon May Fair and one of the organizers.

The contestants yelled everything from “Soo-eey” to “C’mon, piggy.” Contestant Mary Jane O’Neill, wearing a red rose in her hat, sang “The Days of Swine and Roses,” but the hog expressed no interest in trotting over to her.

Among the Dixon 4-H’ers providing the hogs were Cody and Morgan Meitrott, Amanda Phillips, Hannah Harvey, and Elizabeth and A. J. Granillo. Harvey’s hog was earlier named the 4-H Grand Champion.

In the age group, 14 through 17, all who initially signed up “chickened out.”

The Dixon May Fair ended a four-day run on Sunday, May 11.