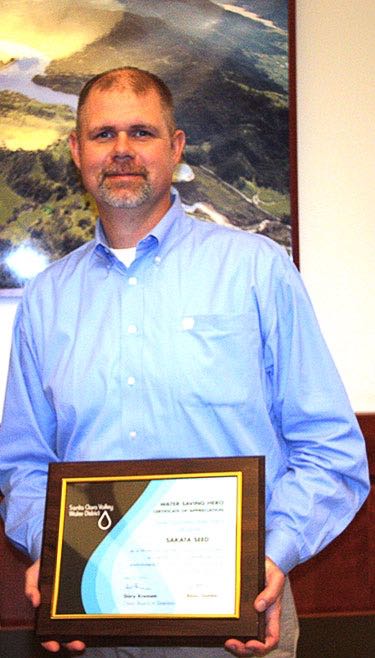 Sakata Seed America is doing their part to ‘Go Green’ and conserve water during the severe California drought. The drought has taken a huge toll on the entire state; however, it has hit both the Agricultural and Horticultural industries particularly hard. According to a study by the UC Davis Center for Watershed Sciences, “the drought is expected to be worse for California’s agricultural economy this year because of reduced water availability…Farmers will have 2.7 million acre-feet less surface water than they would in a normal water year – about 33 percent loss of water supply. Individual farmers will face losses of zero to 100 percent.” In response, Sakata has made it a priority to focus on ways to reduce their water usage and boost long-term sustainability for the future.

In 2014, two main projects were completed to conserve water at the Morgan Hill office headquarters. First, 12,500 square feet of turf was removed and replaced with drought-tolerant plants and landscape coverage. In addition, the overhead sprinklers were removed and replaced with a low-volume drip system. The estimated water savings for the 2014 updates totals to 300,000 gallons of water annually. For the remaining turf, complete irrigation updates were implemented, and over 275 sprinkler nozzles were upgraded to a weather track system which reduces water when it’s not needed, resulting in an additional 50,000 gallons of water conserved annually.

This year, Sakata has already begun their next phase of water reduction. Thus far, 16,088 additional square footage of turf has been removed from the front of the company’s headquarters and replaced with a new, drought-resistance landscape and low-volume drip systems. And it doesn’t stop there, Sakata’s internal committee, ‘GreenUp,’ which is solely dedicated to creating a greener work environment has a lot more in store for the future – some immediate plans for facility upgrades include water-saving restroom updates such as touchless faucets. In addition, the committee is distributing free shower buckets to all interested employees.

Sakata’s water conservation efforts have not gone unnoticed. In September 2014, Sakata was deemed the title of a ‘Water Saving Hero’ and presented a plaque by the Santa Clara Valley Water District, who have been encouraging water conservation all over Santa Clara County with their ‘Brown is the New Green’ campaign, which distributes free ‘Brown is the New Green’ lawn signs, shower buckets, moisture meters, shower timers, shower heads and hose nozzles for Santa Clara county residents.

“It’s part of our responsibility to the community and the industry to conserve water and lower our carbon footprint. We are proud of our efforts thus far, but are determined to take it further and become a role model for other companies,”states Tye Anderson, Senior Logistics & Operations Manager for Sakata.

Sakata’s GreenUp committee’s future plans stretch far beyond lessening water usage and focus on sustainability as a whole. Long-term goals include such workplace additions as bike racks and charging stations for electric cars.

For more information on how you can help conserve water during the California drought, please visit: www.saveourwater.com. For more on Sakata’s contribution, read the full article.